As per this story on The Register, nVidia has announced they are creating a new handheld console named “Shield”.

Let’s start off with the most obvious.  It’s ugly, exceedingly ugly.  The form factor isn’t exactly practical either, this isn’t a handheld you are going to be slipping in your pocket anytime soon.  Which begs the question then… why make a handheld at all? 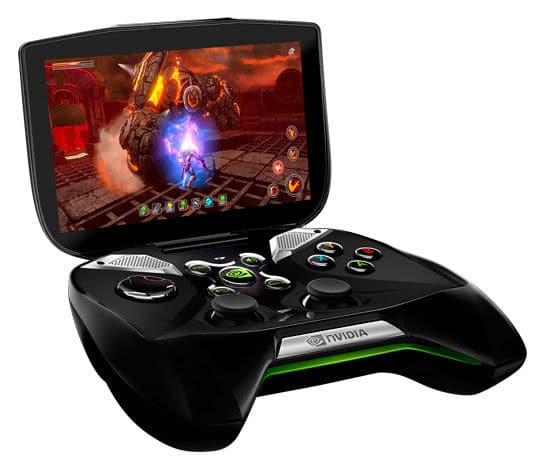 Told you it was ugly!  Basically it’s a tablet pasted to an Xbox 360 controller.  I am surprised with the recent spat of clones and copycat controllers, like this one or worse… the WiiU, that Microsoft isn’t launching lawsuits.

Alright, those are all the negatives, now to some positives.  First off the thing is beefy.  It’s powered by nVidia’s Tegra4 chipset and a quad core ARM processor.  It runs Android, Jelly Bean currently and should be compatible with all the games in the current App Store.  Although I can’t really imagine touch only games being comfortable if the controller isn’t detachable.  It also ships with HDMI out, for those looking for the full console experience.  The screen itself is 720p.

Now the one feature that might actually redeem the thing… it can connect to your PC and play your Steam games by streaming them over wifi.  Now that feature… is neat.  I’ve actually done this already with existing iOS and Android software, and the latency is actually fine, it’s always the controls that let you down.  So I expect the experience to actually be quite nice.  However, if you are home and able to stream your Steam games, why not just play them on your PC?  Now if it lets you buy games from Steam without a PC, that could be a game changer.

As you may be able to tell from my text, I think nVidia are crazy.  It’s too niche a product entering a segment that is struggling already.  Especially when the OUYA Android console already exist and Steam are rumoured to be bringing out a console shortly.  Plus, it really is ugly and unwieldy.

It’s apparently in beta now and could be coming to market within months.