I suppose now is as good a time as any to actually talk about “the game” we are in fact going to create from scratch.  There are a few very key things to keep in mind when going through the game design process…  imagination is cheap and easy for most people, but you always have to keep in mind, at the end of the day you need to implement all these zany thoughts you have had.  So, in a nutshell, when designing a game, keep in mind your capacity and timeframe and ask yourself “can I actually do this?”.  In a nutshell I’m just saying don’t bite off more than you can chew.  So very often you hear people talking about how they want to make their first game, then go about describing some epic MMO that EA would have a hard time budgeting!

At the same time though “Pong from scratch” really isn’t all that exciting, although in all honesty it is a very good place to start.  I have created many “simple” games in the past and one of the quickest things you learn is, that simple it isn’t!  Ok… game time.

Way back in the land of 80s computer gaming, there was a title called Autoduelcreated by Origin of Ultima and Wing Commander fame.  It was based off the Steve Jackson Games, um, game Car Warswhich in a nutshell was essentially MadMax the roleplaying game.  It’s the future, the world has gone to hell and we put guns on our cars… go!  Pretty much that was Autoduel.  Thing is, outside of creating my character, acquiring more money and sporting up my car, the game was actually rather lame, but the first few hours…. pure epic awesome.  Especially the time spent in the Arena and then using your winnings to design your first car! This bit of character building, customization and arena combat has always been buzzing around in the back of my head as the core of a very good game.

Now also may be a good time to point out that referring to yourself as “Lord British” is not really all that indicative of sanity.  This is to say nothing of poor “Chuckles” who you know had to have been talked into this whole thing.  Now Richard “Lord British” Garriott created many of the defining games of my childhood, so I am going to give him a pass on this one, but to you budding game designers, I don’t recommend it at all!

Anyways, back to the whole game design.  In a nutshell the big things I took away from Autoduel were the character development, arena combat and vehicle customization and of course the arcade like controls when you are actually duking it out.  The kernel of a very fun game is in those simple points.

Then in 2002, what is perhaps my favorite game of all time was released, Mechwarrior 4: 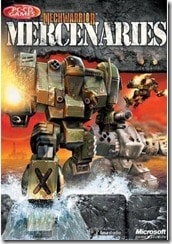 Mercenaries. In this game you control a giant Battlemech, which is essentially a giant piloted robot killing machine.  What made this game truly great, especially compared to earlier versions, was the ability to purchase and customize your mech.  A perfect blend of strategy in the mech creation aspects, then thrust you into the action just like Autoduel did years earlier.  Even more uncanny, their was a portion of the game where you character competed in arena games, and again like years earlier with Autoduel, this was hands down my favorite part of the game.  Now, as I understand it, I need to be very very very careful in my use of terms here.  Mech, Mecha, Battlemech, etc… are all trademarked terms and will summon a hoard of avenging lawyers faster than you can say “lawsuit”.  This is why over the years we have been introducted to Chromehounds, Gears, Hercs and hundreds of other words that aren’t Mechs.  So let me say it loudly and now, this is not in any way going to be a game about Mechs!  This is going to be a game about giant mechanical human piloted robots!

So, before I get into more detail later on, essentially I am looking to create a game that combines Autoduel and Mechwarrior, with an arena focus.  Let me say this as loudly and plainly as I possibly can… our giant robots are not, in any ways Mechs!  So please don’t sue me.