One nice recurring trend with mobile applications is a wealth of post release support. Fortunately, Photoshop touch is no exception. As of this writing ( February 17th, 2012 ) Photoshop Touch has been patched to 1.1.1 and happily they addressed most of my biggest complaints!

So then, what was the biggest irritation ( for me ) with Photoshop Touch? That would easily be the lack of export options. You basically had two options, Photoshop Mobile [PSDX] and JPG. The JPEGs it exported were so horrifically compressed that I could almost draw better with crayons, while the PSDX files could only be opened with Photoshop CS 5. Both were pretty much show stoppers to me actually using Photoshop touch regularly, but in this regard I have great news. The following image pretty much says it all. 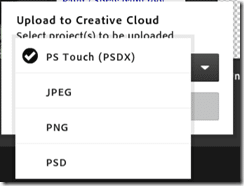 Yep, Photoshop Touch can now export to PNG and regular old PSD! Additionally they ramped up the visual quality of JPEG images to the highest quality settings, so your files are going to be a little bit larger but a heck of a lot less ugly! The addition of PNG will allow you to export small files that preserve transparency, while the support for PSD will allow you to easily continue editing on your desktop. I did encounter one little problem however. I uploaded an image to Adobe’s creative cloud as a PSD, then downloaded and my layers were collapsed! Hopefully this gets fixed, as the entire point of PSD exporting would be to preserve layers. I am happy to report however that this does not occur if you open the exported PSD on your desktop, layer information is preserved, so it’s only on loading existing PSD files in Adobe Touch. Annoying, but minor.

If I am honest for a moment, I never actually expected this feature to appear. I thought the PSDX file format was an artificial way to lock people into Photoshop CS5 or higher. I have to say kudos to the PS team for adding this feature, especially if it was the political land mine I expect it might have been!

Another annoyance that I frankly didn’t expect to be addressed, so it delights me to see they have fixed it, is proper support for the back button! It’s a small thing, but it was exceedingly irritating, often causing me to exit out of my work instead of going back a screen. I am happy to see this resolved. Now if you hit the back button, it does exactly what you expect, closes an open dialog, or returns to the previous folder or screen.

Otherwise there were a number of bug fixes, performance enhancements and other tweaks but honestly I never really noticed much here. Many of the fixes revolved around Ice Cream Sandwich support, which I cannot frankly test ( hurry up Asus! ). On Honeycomb using my Transformer 1 I never really found the performance lacking in the first place, nor did I ever experience a crash. I think things are a bit more responsive and the file management seems cleaner, but I only have a single tablet and you can’t roll back updates, I can’t compare them side by side. Again, since I didn’t really have an issue before hand, it makes such changes less noticeable. If you experienced performance or stability problems, be sure to update.

Is it perfect? Not quite. The 1600×1600 file size limit it still there which is unfortunate but understandable on more limited devices. That said, desktop Photoshop has had no such restriction since the days of the Pentium and modern tablets are an order of magnitude more powerful, so this limitation seems arbitrary. It would be nice to see it removed, even if it flashed up a warning “Your performance may be awful if you continue!” or if it reduced the number of layers available. In the end though, 1600×1600 is generally good enough for me. As I mostly work in textures, 2048×2048 would be nice, but not the end of the world. There are also a few small warts in the UI, for example when exporting, there is no prompt to tell you to start clicking the thumbnails of the files you want exported, so you can find yourself sitting there thinking “Hmmm, now what?”. There was also the matter of importing PSD files not preserving layers mentioned earlier. That said, this stuff is extremely minor.

All told, an excellent update that removed the applications biggest fault. It is nice to see good post release support from Adobe and hopefully it continues. There are still a few things I would like to see added, but at the same time, it is a 10$ application on a resource constrained device! In the end with recent updates, they have turned it from a cool but limited application to perhaps the most useful application on my tablet!

If I gave star ratings, this would easily be a 5 out of 5, or 7 out of 7 or whatever arbitrary value range I went to go with. But, I don’t. So all I can say now is, if you want to do image editing or texture work on your tablet, buy Photoshop Touch.