I promise not to let it occupy all of my life… I say as I write this at 4AM in the morning!

Actually, so far the launch has been a gigantic epic failure, not that I am shocked.  As for right now the American forums are down completely.

I signed up for a Battle.NET account ( was one of 8 people alive that didn’t play WoW ), purchased my copy from Blizzard.com, went to activate it and:

This Battle.net account does not have a Diablo 3 License attached to it.

Hmmmm… go check my email, no keys sent.  What the heck is going on?  Battle.Net says my account is active.  Turns out this is a pretty easy fix, for some reason Diablo 3 set my region to Europe, and your account appears to be region locked.  Simply go to Options->Account and change your region.

For such a massive launch, that’s a pretty stupid error message.  Well, once I set the region I at least stopped getting the “This Battle.net account does not have a Diablo 3 License attached to it.” message. 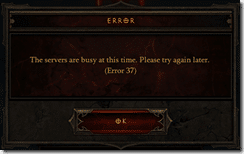 The servers are busy at this time.  Please try again later (Error 37).

Always on DRM for a single player game… what could possibly go wrong?

On the bright side, it looks like Diablo 3 isn’t going to be too distracting for now!

EDIT: A fair number of people seem to be having login problems.  Unfortunately beyond the fix mentioned above, there is very little that can be done.

Error 37 and 3005 apparently just mean the servers are overloaded.  All you can do in this case is keep trying.

As per the Diablo 3 support blog:

Our servers will send an Error 37 or Error 3005 message when they are under heavy load. If you are not able to log into Diablo III and receive an Error 37 message, try logging in again. It may take several login attempts before you successfully connect.

Sadly, most of the problems seem to be the simple fact their servers got crushed and Blizzard dropped the ball.  Hopefully they pick it up and fix things quickly.