Today Sony released more information about the upcoming PlayStation Mobile launch.  If you have never heard of it, PlayStation Mobile is a development platform for creating games on the PlayStation Vita as well as a number of Android based devices.  Originally that list included

mostly just Sony’s line of Android devices but that is changing.  A few months back at E3 it was announced that select HTC devices, specifically the HTC One series of smartphones, would be supporting PlayStation Mobile.  Sony have just announced another two vendors have been added to that list. ASUS and WikiPad:

“Inspired by the diverse needs of consumers in all areas and phases of life, ASUS’ foremost mission is to deliver truly innovative solutions that inspire consumers to reach for greater heights of productivity and fun. The ASUS Transformer Pad, which can transform from tablet to Notebook PC delivers this value,” said Samson Hu, Corporate Vice President & GM of Mobile Communications Products BU at ASUSTeK Computer Inc. “As a leading enterprise in the new digital era, ASUS offers PlayStation-like gaming experiences with the convenience of its array of products. With the Transformer Pad’s inclusion as a PlayStation Certified partner, we will surpass users’ imaginations and change the rules of gaming.”

“Wikipad is the first true video game tablet built with an attachable gamepad controller that provides gamers with a mobile console experience. As we head into our upcoming launch, we are excited to be partnering with Sony Computer Entertainment.” said Fraser Townley, President of Sales Wikipad.Inc.  “PlayStation’s continued commitment to delivering innovative entertainment experiences that captivate gamers is unparalleled and we are thrilled to partner with them.” 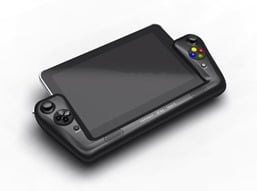 I will admit, I had not heart of the WikiPad before today and I have to admit it is a cool looking device ( pictured right ) with a terrible name.  Of course, I have heard of Asus, in fact I own a Transformer personally and love the device.  With the quagmire that is the existing Google Play store, and alternative, especially a game focused alternative with Sony marketing and branding back it, could be an absolute godsend. Especially with a layer of quality control thrown over top, so we don’t get drown in a sea of “fart apps”.

Speaking of which, Sony also announced a revised list of developers that are working on PlayStation Mobile titles, and it has grown a fair bit since E3.  Choice names on the list include ARC Systems Work, ASCII Media, FromSoftware, GameLoft, Nippon Ichi, SEGA, TECMO and THQ.

Buried in the announcement was this blurb as well:

I am not completely sure how to interpret that statement.  I believe it means they be moving the PS One classics into the store, but I am not positive.

The launch has been announced as “this fall” and will be available initially in the following countries:  Japan, United States, Canada, United Kingdom, France, Germany, Italy, Spain, and Australia.