I’m about to date myself brutally with this post (hint… I’m old… much older than this book, which is also old ), however when I stumbled upon this book it stirred a bit of my childhood in a way that no Michael Bay butchered film can even attempt.  You see my first home computer was the Atari 800XL, a machine that still owns a solid place in my heart. 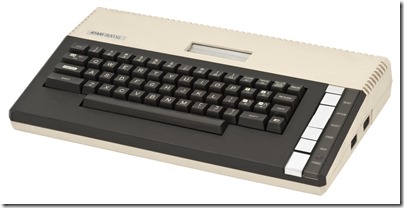 Such an amazingly sexy thing, no?  Well in 1983 it certainly was.  Within minutes of bringing it home, my dad managed to erase the disks that came with it, leaving me alone with an Atari 800XL, the manual, the ROM version of BASIC ( thankfully ROM is remarkably Dad proof… ) and 6-8 weeks will waiting for media replacement from Atari.  On this day two journeys began.  My Dad’s continuing and overwhelming hatred of computers and my programming career.

I’ll admit however, although I managed to scrape together some simple text adventures, a dice rolling game and a few other simple examples, I was simply too young to get very far.  I was still quite young and information simply wasn’t as available as it is now.  It wasn’t really until I got a PC that I really started to learn to program properly.  Unless of course you count copying hundreds of lines of assembly from the pages of a magazine programming…

This is a bit of a shame too as the world of programming on 8bit machines was almost magical.  While those lines of cryptic bytes I typed back then seemed like magic, now that I’ve got a good 20 years of programming under my belt, I have an appreciation for how simple things actually were.  On top of that, expectations were so much lower, it truly was the age where a single developer in his garage could make a successful game.   Yes, you may have been working in BASIC or even Assembly, but the underlying processors were so simple compared to today, that with the right information, it really wasn’t the nightmare you expect it to be.

It’s funny, you hear lots of people say they want to work in C++ or C because they want to “get closer to the machine”.  Want to get closer to machine?  Travel back in time!  I actually think there is a lot of value in people messing around in these old systems.  So when I saw this book appear on Safari, I decided to give it a look.

Retro Game Programming:Unleashed for the Masses 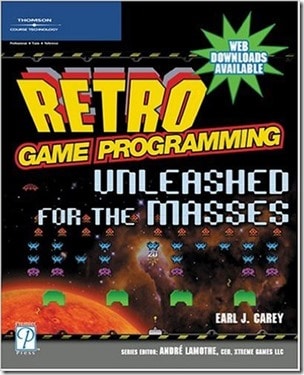 I suppose that entirely depends.  The book is in a word, sloppy.  It covers a number of old systems including the Atari 800, C64 and TRS80.  It actually wastes a chapter on plugging these various machines in…  yeah.  This chapter alones suggests to me that the book may not have in fact had an editor.

But then it gets a bit more interesting, there’s a touch of history which I almost always enjoy, I’m not sure how it would go for someone without my rose coloured glasses on.  Then the book seems to flip back and forth between being a complete beginners book and… not.  We get a chapter on 6502 assembly programming… very cool.  We get some coverage of setting up the video and drawing to the screen, which are good reads.  Then a chapter on input and player AI, which frankly doesn��t have a single purpose for existing.  Followed by a chapter on audio programming.  It is then all capped off with a completely meaningless BASIC text adventure.  Had the book actually concluded on a complete Assembly project using what we’d learned so far, I think that 1.5 star rating would be a great deal higher.

So do I recommend this book?

No, not really.  However as I said earlier, I discovered it on Safari and it provided a few hours of amusement.  If you were looking for an interesting, but sloppy, look back at the way things were, it’s certainly worth the couple bucks it’s being sold for these days.  Even more so because it is now easy to get a hold of incredibly solid emulators of all the systems used in this book.  There is value in modern programmers experiencing how things used to be, and it’s amusing for the older folks among us to take a trip down memory lane.

You may be asking yourself…  hey did he just review a 10 year old book that he didn’t particularly like?  Why yes, yes I did.  I will say however, one of the advantages of being a book on retro game development is…  you never really become out of date, do you?