ShaderForge, on of the more popular extensions on the Unity Asset store, was just released completely free and open source today by it’s developer.  The developer made the following tweet this morning: 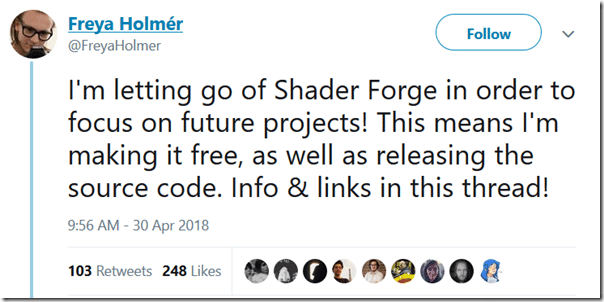 The source code and associated assets are now available on Github under the liberal MIT open source license.  The developer opted to make it free and open source because they no longer intend to continue development and Unity 2018 has currently broken ShaderForge due to it’s new shader model.

ShaderForge is a visual graph based shader authoring tool that makes creating shaders a great deal easier.  Similar functionality to this is now be including in Unity 2018 and earlier, so this release is really only relevant to people using Unity 2017 or earlier, or people that are interesting in diving in to the source code.