The update notes are rather sprawling so I have excerpt the majority of the changes below.  Go check out the full post for even more details:

Woo, there’s a lot to cover.

I’ll state this right up top for clarity:
I believe it’s important to understand how your tools are made, and what features they offer.A lot of the changes below won’t break your game code dramatically or anything – But it’s good to pay attention to the details. It’s totally fine if a lot of this is stuff you’ll never need to interact with directly.

It’s also worth noting there are so many changes that I probably missed listing some here, or chose not to because the compiler will tell you about them. The most important stuff is covered below!

The most important change of course is that the snow core itself is now written entirely in Haxe! On native targets uses the linc libraries directly to handle the platform specifics as needed.

An important point of this is that all of the linc libraries that are dependencies of snow, are available at your disposable. For instance, you may now call SDL directly from Haxe, directly from your game. This is true for snow and luxe users of course. There are a number of new APIs available, and this aspect will continue to improve over time – but keep in mind that they change the nature of your code for the platforms you’re targeting – this doesn’t magically allow you to call SDL APIs on the web platform. The linc libraries are C++ target specific, and some of them get more specific by platform (like Desktop OpenGL calls on mobile are not viable). You have the tools to deal with that of course, but keep it in mind.

There’s is some deep diving though process below the bullet lists if you’re interested.

It’s hard to even pick from the list because of the amount of changes and improvements that have gone in but here are some of my favourites:

With some minor configuration Android Studio lets you debug native code and java code at the same time. Since this is about Android Studio, it’s worth mentioning the Gradle based build workflow, Android build specifics in the IDE, access to android frameworks and libraries and much more. 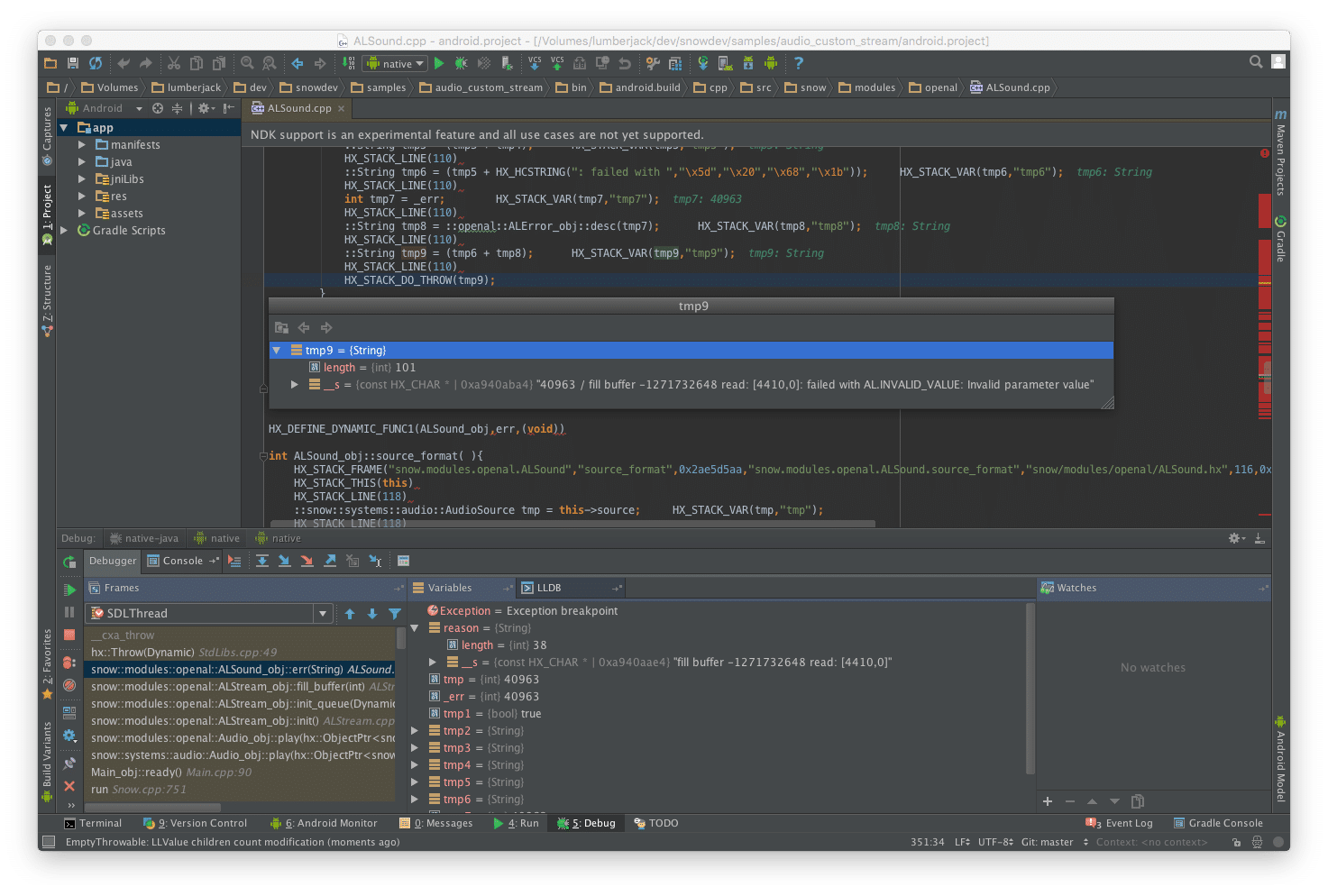 Zero runtime allocations by snow itself

Since the new version is significantly closer to beta than before – that goes for tightening up the performance profile of the core framework. Lots of performance improvements and consistency fixes all around. 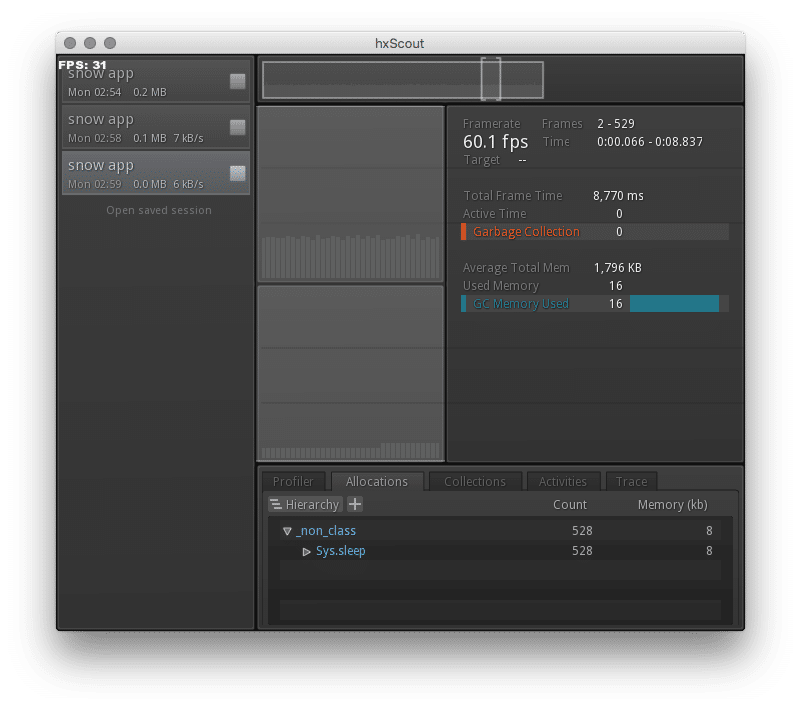 Having everything accessible makes a big difference, and allows much easier access to important native functionality. This is part of the much mentioned ongoing native features, and is what allowed us to easily use Android/iOS native services from Haxe without much effort at all. Here’s a teaser of a (nearly ready) linc library that leverages this for example: 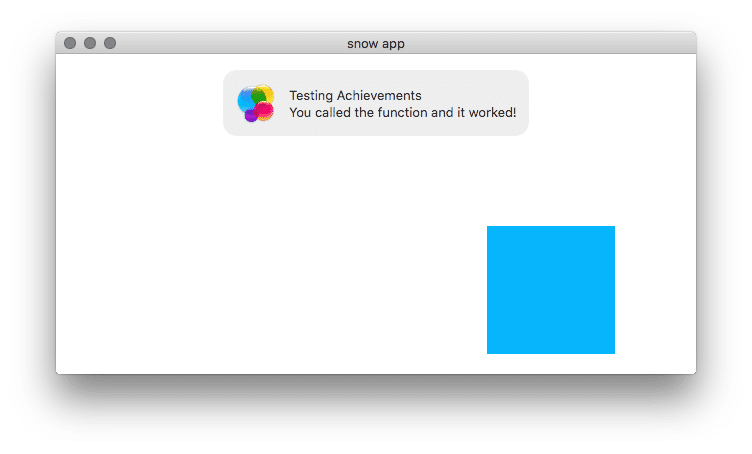 As mentioned in a previous dev log – maintaining legacy code during alpha and active development makes no sense in practice. From this update:

This decision while pragmatic is also dictated by Haxe and hxcpp features, there are things required in the newer code that just don’t run on older versions.

hxcpp compile cache
I’d also encourage you to try out the newer hxcpp cache features, which significantly speeds up C++ builds. They share files built by projects in a smart way, which means you only have to build files used by all your projects when they change and not every time they need to be built. Here’s an example of a clean rebuild of a snow sample that took ~4 seconds, a lot of that time spent in the Haxe compiler on the code than the c++ build.

To use it, for now you have to set an environment variable pointing HXCPP_COMPILE_CACHE to a path to use. The path must exist before it will work, so create the folder manually first.

If you have issues using this (I haven’t with months of use, across projects large and small) file an issue on the hxcpp repo with the necessary steps to reproduce.

Since snow now depends on a number of linc libraries – you have to install these before using the new. Luckily installing them is easy, just run the following:

It’s important to note that if you clone them directly, be sure to use git clone --recursiveand if you already cloned without that run git submodule update --init in the folders. If you don’t you’ll get build errors as the submodules files are missing.

The setup process will be more automated soon ish.

snow no longer has any prebuilt components and includes the c++ directly into your app in a clean way. This removes the ndll folder and its set up step entirely, so don’t worry about that any more.

If you ran into previous Visual studio/MSVC version inconsistency issues with snow previously this should be resolved now because of the above changes too.

Remember, most of these seem drastic but have 1:1 parallels from SDL or new linc libraries.

A lot of the pruning here is to finalize the API from it’s exploratory roots. Portability, maintainability and parity are important to me (and I’m sure many users). Every API endpoint that exists in the core API is an implicit statement about it’s support on all supported platforms and targets.

There were plenty endpoints where this wasn’t true, and many cases where it was just impossible (like setting the mouse cursor position on a browser will never be allowed due to security risks). If the user was making assumptions would end up being mislead into disappointment but the fault would partly be on the API.

In line with the vision and goals of snow, the best option was to remove all of that down to the absolute minimum that can be delivered upon consistently – which this update definitely gets close to achieving – and to make every non portable API endpoint much more explicit like the original module/API separation. Now you can always tell whenever the code you are calling is intended to be portable or not, making your code that interacts with snow more imperative and easier to reason about.