One of the nicest features of going with Blender is the fact that it is open source.  One of the nicest facts of open source is you don’t have to wait for a vendor to release a new version, you can go get the cutting edge version at any time.  That said, building Blender from scratch is a non-trivial task, but nicely for that, we have graphicall.org.

choose a build to download.  You can choose by OS, bit-ness, or the various features included in the build. Why the heck would you want to do this?  Well, frankly some of these features are incredibly interesting, but perhaps most interesting of all, is the new BMesh tool.  Remember how I said earlier that the weakest link in Blender was the modeling tools, and the one feature it was missing the most was the lack of n-gons?  Well, bmesh addresses this shortcoming.  It is rumoured that it will be part of Blender 2.8, but it as been in development for a very very very long time, so don’t hold your breath. I will hopefully have a demonstration up shortly that illustrates this powerful tool.

But bmesh is by no means the only thing to look forward to.  Another area graphicall builds cover is Google Summer of Code builds.  If you have never heard of it, instead of getting a summer job, students instead propose a project in the open source world and if approved, get paid by Google to implement it.  This year, Blender is a pretty big winner on the number of projects sponsored.  About half of the projects on that list will be a huge boon for game development.  The various branches can be viewed here.

A quick trip to GraphicAll is going to confuse the hell out of you though…  Avacodo? Radish? Cucumber?  WTF?  Well, let’s just say the Blender group like their code names!  Last time it was fruit, this time, it’s veggies.  Anyways, this infographic that I brazenly stole from here which in turn they stole from here.  Anyways, it’s a good image, so here goes(click image for original). 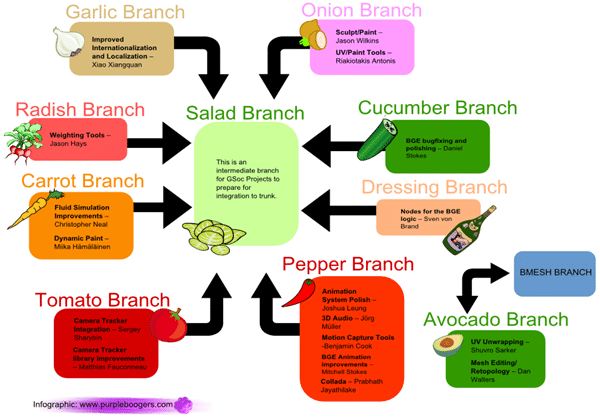 Anyways, probably of most interest from a game perspective are the Avocado, Onion, and Pepper branches.  Of most interest to game dev work is the Avocado branch, which is the only one based off the BMesh branch instead of the main trunk fork ( Salad branch ).

But by no means are we confined to the Summer of Code builds, lots of other stuff is available as well.  There is Blender Cycles a GPU based render, LuxBlend interface for LuxRender, Yafaray as well as builds using OpenMP for better multicore CPU support.

So, if you are willing to take a walk on the wild side and put up with a few more bugs and glitches, Graphicall is very much worth checking out!