This post is waaayyyyyy off the topic of game development but it’s one of those things I have been fighting with for months so I figured I’d share the solution in case any of you are having the same issue.

Basically with one of my laptops I would often see my computer crawl to a screeching halt, to the point of nearly uselessness.  Generally the culprit would be MsMpEng.exe chewing away at my CPU, generally maxing out a core completely.  On occasion it would be Thunderbird ( my email client ) maxing out a core, but frankly this was pretty typical Thunderbird behavior( when indexing or downloading mail it used a lot of CPU ), so I would generally ignore it an expect it to go away.  Normally I would simply kill off the MsMpEng task as well as the msseces.exe ( which would simply restart MsMpEng if not killed ) and the problem would go away.  Not ideal killing off my anti-virus, but it’s one of those “I’ll look into it later” things.

Of course, later always became later until this morning when I simply got too fed up with it.  I was about half an inch away from just uninstalling Microsoft Security Essentials and going with a different anti-virus app.  This morning, both Thunderbird AND MsMpEng were taking turns maxing out my cores, so I finally put one and one together…  The fix is remarkably easy, in Microsoft Security Essentials, go to the Settings tab, select Exclude processes and add the Thunderbird.exe process like such: 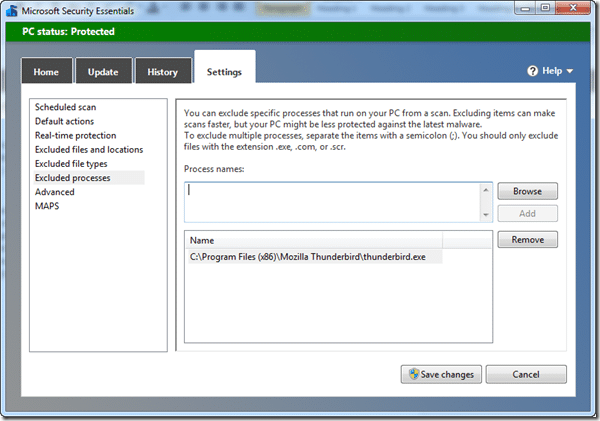 Alright, now that my computer is no longer acting like a 386 with the turbo button disabled, back to making games!