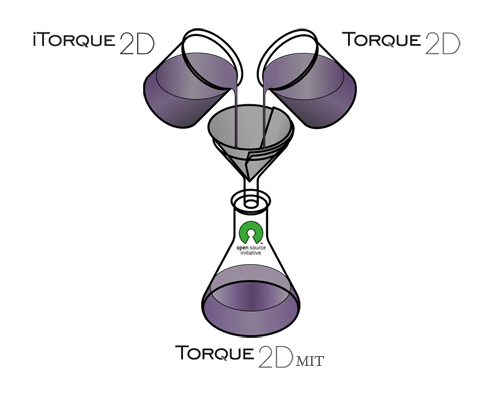 Torque2D is a 2D version of the Torque game engine that also includes WYSIWYG level editing tools and it’s own scripting language, TorqueScript.

As you can see from the picture to the right, iTorque2D, the iOS version of Torque2D, is being folded in to this release.  Torque2DMIT will be released early next year.  However there is one gotcha with that release date:

In order to work in an open source environment as soon as possible, we made a decision to publish our initial version of Torque 2D MIT without the editors; in other words, the initial version will be an API only engine with tool development to follow thereafter.

So basically that WYSIWIG level editor I just mentioned?  Well, it wont be ready day one.

As to the license, the MIT license is one of the least restrictive open source licenses available.  Basically you can do what you want with it.

You can read more details about Torque2D here.

Pretty cool news over all.  When Torque3D was open sourced, they moved pretty quickly to release the source code, so hopefully the same happens here.