Over the past day there have been a pair of announcements on reddit that are relevant to game developers.  The first is Sony released and open source generic 3D level editor, generically enough called ATF Level Editor.  ATF stands for Authoring Tools Framework, which they open sourced earlier, ATF is a framework of mostly C# based components for making game tool development easier.  It was used to build games such as The Last of Us, and games in the KillZone series.

As to the level editor, in Sony’s own words:

The LevelEditor is a software tool used to design levels (maps, campaigns, and virtual worlds) for a video game. A level editor is used by a game designer.

The standalone LevelEditor is a fully functional modern level editor. Using the LevelEditor, you can design a game world for any video game engine. You can create and lay out terrain, place static game objects in the world (such as rocks, plants, street lights, or buildings), place light sources for game objects, and place Linears for dynamic game objects.

The LevelEditor leverages the Authoring Tools Framework and C# for user interface and data management, and leverages the power of C++ and Microsoft® DirectX® 11 for 3D rendering.

Originally built from the Authoring Tools Framework, the LevelEditor offers a WYSIWYG interface and a variety of features that support asset management, game object creation, scene layout, and cross-team development. The LevelEditor can also be customized and extended by creating plug-ins. For more about the Level Editor’s capabilities, see LevelEditor Features & Benefits.

Screenshot of the Editor in action: 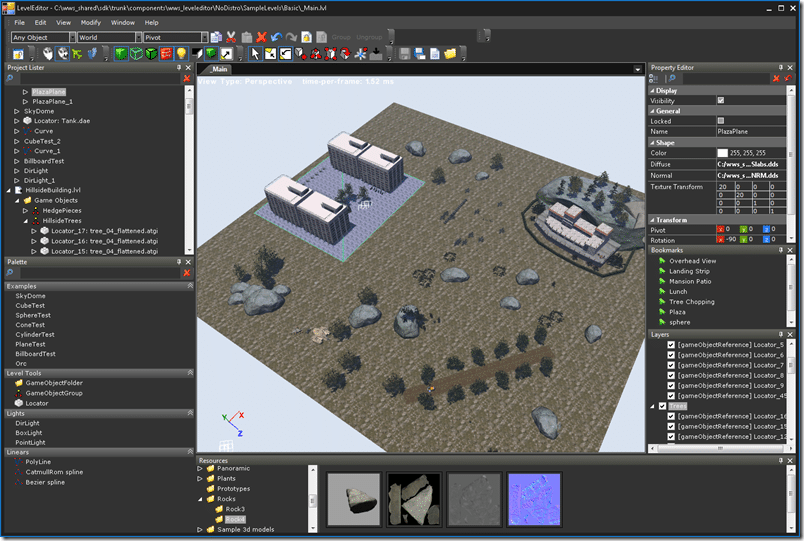 The editor is available on Github and you can get more information on the Wiki.  The documentation is available here.

This looks like a great option for people that want to roll their own engine, but still want great tooling support.  All that is required to integrate within your own pipeline is a converter to read Sony’s XML output.

The next announcement was the open source release of the Donkey Tech 3 engine.  This was an in-house developed game engine that supports the most popular platforms ( desktop and mobile ).  The code is primarily C++/ Qt based.  The engine itself includes a 3D component based world editor as well as a visual graph scripting system, somewhat similar to Unreal’s Blueprint system.

Documentation is incredibly sparse, there isn’t even really an overview of what the engine does.  Here is the author’s reddit post:

EDIT: Funny. I forgot the link to the engine. It’s HERE

Here’s my game engine that I have been meaning to open source for years now. It has a full editor, node based scripting system, DSP audio effects, Particles systems, and supports 2D or 3D games. It’s built to be completely generic as to what kinds of games you want to make.

Here’s some videos of it in action: Editor, Scripting, Sound, Keyframing

I hope you find it useful. Enjoy!

Here is a description of the previous version of the engine:

Here is a video showing scripting within the engine:

The game engine code, a sample game and an empty project can all be download on Github.