Today I suppose, the new tutorial series covering creating a 2D game in both Unreal and Unity officially kicked off.  I just finished publishing this video 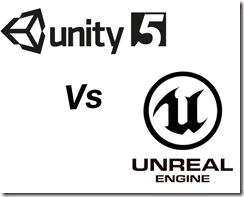 In many ways the video covers the same topics as the earlier announcement post.  Additionally it also goes into a bit of the differences between Unity 5 and Unreal Engine 4, especially from a licensing perspective, and area where Unity and Unreal differ a great deal.

We also cover some of the similarities and differences between Unity and Unreal Engine, which are probably more alike than you realize.  We go into the languages and platforms supported by each engine.  Of course we also describe the goals of this entire series.  If you are already familiar with Unity and Unreal and read the last posts, there isn’t really anything new here.

Once again, your comments and feedback will shape how I continue, so the earlier you can get suggestions in to me, the more likely I am to be able to cover them! Next up I will be doing a learning resources post for each engine, then we will jump in to the technical details, so stay tuned!