Hot on the heels of last week’s 4.13 preview release, Epic have just released Unreal Engine 4.13 final.  As with all UE4 releases, this one of course adds new features and functions to make your game even prettier such as mesh decals, GPU morph targets, refraction improvements and more.  Probably the biggest new feature in Unreal Engine is the Sequencer, the NLE or Non-Linear Editor, now built into the engine making movies and cutscenes much more capable.  From the Unreal Engine blog 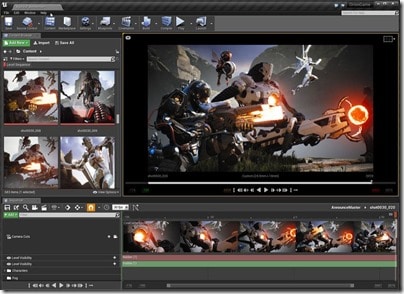 Unreal Engine 4.13 has arrived! In this version you’ll find numerous improvements across the board.

Many new rendering features have been added, such as mesh decals, Blueprint drawing to render targets, GPU morph targets, refraction improvements and high quality, optimized noise functions are now available to materials. Shadow map caching allows for more shadow-casting dynamic lights in a scene than ever before!

Sequencer, our new non-linear cinematic editor, has been updated with a slew of new features for high-end cinematography. Live recording from gameplay has been significantly improved. Also, you can now transfer shots and animations back and forth from external applications. You can see these features in our SIGGRAPH Real-Time Live! 2016 demonstration.

Alembic support allows you to import complex and interesting vertex animations. And the new Physical Animation Component lets your characters respond realistically to physical forces by driving their skeletal animation through motors.

For mobile developers, dynamic shadows have been optimized, full-precision materials are supported, and custom post-processing is now possible. OpenGL ES 3.1 can now be used on Android, and binary shader caching will improve your iteration times.

VR games can now use capsule shadows, and stereo instancing has been optimized. Oh, and check out the new VR Template Project! It’s a great example of how to use motion controllers to interact and navigate in your VR game.

Want to build your levels while in VR? Unreal’s VR Editor has been improved with support for mesh and foliage painting, a new transform gizmo, and VR color picking. Finally, you now can instantly play your game right from VR! You can turn on “Enable VR Editing” in the Experimental section of your Editor Preferences.

Of course Unreal Engine releases always come with massive release notes, and this release is not exception.  To read the full details of this release click here.