Unreal Engine 4.16 was released today.  As is typical with Unreal Engine releases, this one is packed with new functionality and improved performance on mobile and console platforms.  This release adds new Volumetric Fog effects, a new lighter rigid body and cloth simulation tool.  This release also adds support for the Nintendo switch, as well as launching not just one, but two new audio engines.  Details of the new release:

Unreal Engine 4.16 includes exciting new rendering and animation features, significant performance improvements for mobile and console platforms, and tons of quality of life enhancements that will make it even easier to make stunning environments and engaging experiences that run smoothly on a wider variety of platforms. 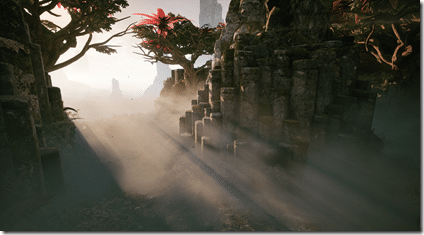 Enhance the mood of your environments using the amazing new Volumetric Fog feature, which can be enabled to automatically render realistic fog and smoke effects with consistent lighting anywhere in a scene, even at a large scale.

Garbage Collection is now twice as fast! UI rendering performance and UMG widget creation speed are vastly improved to enable you to create even more compelling interfaces. Interfaces and workflows for VR Mode, Animation, Sequencer, and other tools have been updated to make your development process more streamlined than ever before.

Support for Nintendo Switch is fully-featured and ready for production in 4.16! Epic Games has teamed up with Nintendo to release the full UE4 source code for Nintendo Switch to approved developers for free. To learn more about how to get started, read more here.

DirectX 12 is now the default renderer for Xbox One, bringing both performance and feature enhancements to platform support in the engine. In addition, you can now develop HTML5 games using WebAssembly and WebGL 2, and this new path will continue to improve in UE4.

For mobile, the Android virtual keyboard is now supported, and runtime permissions have been exposed to both Blueprint and code. Plus, we have made even more strides to reduce executable sizes for mobile apps!

Check the full release notes for a great deal more information.  As always you can download the new release using the Epic Game Launcher.