Unreal Engine 4.7 was released today and boy was it a good one.  In their words:

Unreal Engine 4.7 is our biggest release yet, with the power to render huge numbers of instanced objects in large worlds, beautiful rendering of leaves and foliage, HDR texture support, 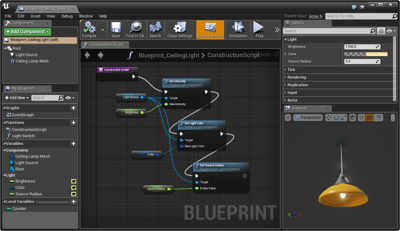 in-editor animation editing, along with hundreds of optimizations and improvements.

Many highly-requested features have been added: You can now assemble new actors using components right in your level, and even create your own custom component types using Blueprint visual scripting or C++! Speaking of scripting, the Blueprint Editor UI has been redesigned with a clean, unified layout. And it’s never been easier to import content in your project — Unreal Editor now detects new asset files and imports them automatically!

HTML5 platform + WebGL is ready to use — run your game in a compatible browser with a single click! You can also now build, cook and deploy Android devices on Mac. For virtual reality creators, new “VR Preview” feature immerses you in your world instantly from the editor. In addition, you can now access Leap Motion support if you’re building a code-based project. Finally, we now give you the full C++ engine source code in every release to make learning and debugging even easier!

Highlights of the update include:

You can read the blog post here, or the complete release notes here.