People have been talking for some time about how the indie market is exploding, that a massive influx of indie game developers have lead to a 1983 style market collapse.  This is of course mostly BS, the kind of thing certain websites spew in their headlines to bait clicks.  That said, there is a kernel of truth in it all, but the take away probably isn’t what you would expect. 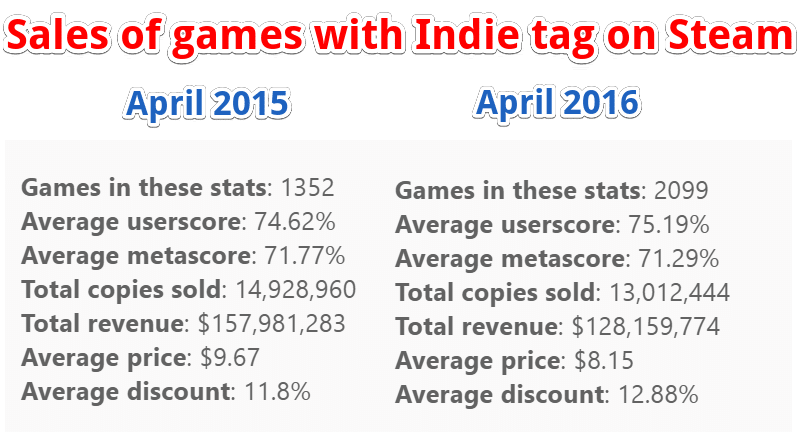 Ouch…  Ok, that certainly looks like a bit of a meltdown now doesn’t it.  Not world ending but a 50% increase in the number of games available coupled with a decline of 20% in total revenue shared… that can’t be good, can it?

Well, the decline in total revenue certainly isn’t good, that’s for sure.  At the end of the day though, this is mostly illustrating the long tail of indie gaming… you see, this data represents the number of games tagged “indie” on steam.  This isn’t 2099 new games we are talking about here… 1352 of the 2099 games are from April 2015 and earlier.  Of course the number of games is going to rise over time.

The decline in revenue though, well that’s certainly not good.  However… 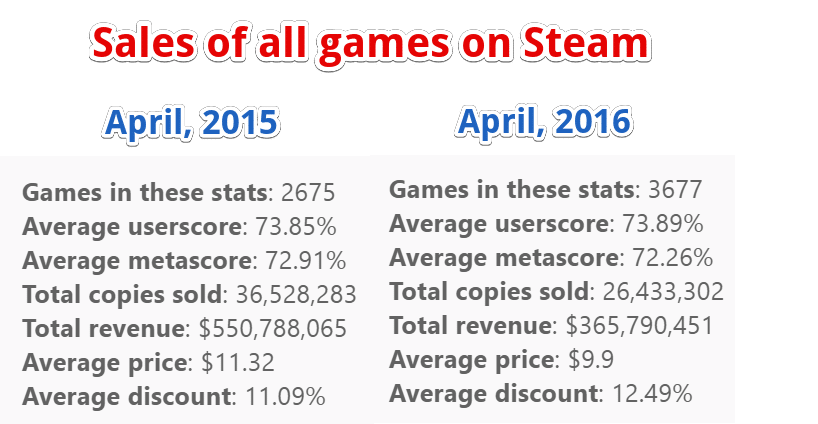 This is a comparison of ALL games between April 2015 and April 2016, so this includes A and AAA titles as well.  Notice something?  A 37% decline in total revenue.  So you could argue, on Steam at least, indie games are doing better than the rest of the segment.

Of course, takes this all with a grain of salt.  First off, this is only Steam related data.  April isn’t exactly the kind of month that lights sales charts on fire, it’s not the kind of month where Steam runs it’s mega sales and frankly GTA V shipped in April of 2015 so that’s going to impact the numbers more than just a little bit.

What these numbers do show is actually relative stability in the indie market an the potential presence of a long tail, which is actually rather handy for indie developers that ship multiple titles.  The > 10% decline in average unit price though… that isn’t a great trend.