can read the full Pocket Islands / Magic Land ( which used to be a Facebook App ) story right here.

If we are honest, after reading that I think they are putting too much blame at the feet of HTML and not enough at the feet of Facebook and themselves.  Additionally, in the few minutes I played, I saw a remarkably polished, pretty, *boring* game.  That said, I find that with most social games, so perhaps I am not the proper critic… 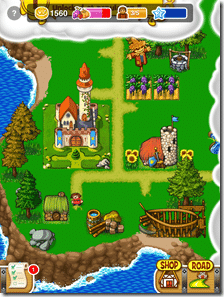 Anyways, the end result is a good one for the rest of us.  The source is now up on Github. I don’t know about you, but I always jump at seeing commercial source code when the opportunity presents itself.

The tool chain required does seem a bit… complicated though.  brew, ruby, gem, rake, markdown, gcc, node, lessc, jslint, spritoia and pngcrush.  That said, ive never done an ounce of Ruby programming, so perhaps this is par for the course in ruby development.

Good on Wooga for sharing.  Perhaps nicest of all, the art assets have all been included as well ( under the Creative Commons non-Commercial license ).