Today Amazon announced the preview release of their new AR/VR engine “Sumerian”.  Sumerian consists of a web based editor for composing AR/VR scenes as well as a programming environment, either using a visual interface or scripted via JavaScript.  Sumerian currently supports 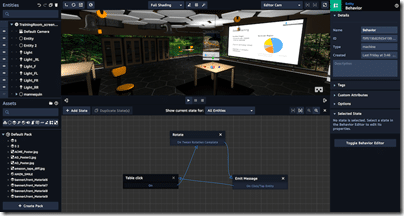 Oculus Rift, HTC Vive and iOS devices with Android ARCore coming soon.  The editor enables you to import and then position 3D objects authored in either OBJ or FBX format, with Unity scene format coming soon.

You can preview a Sumerian authored scene in a WebGL 2 capable web browser by clicking here.  Advanced warning, this scene caused Chrome to freeze up on my computer, so your mileage may vary.

Sumerian in Amazon’s own words:

Amazon Sumerian lets you create and run virtual reality (VR), augmented reality (AR), and 3D applications quickly and easily without requiring any specialized programming or 3D graphics expertise. With Sumerian, you can build highly immersive and interactive scenes that run on popular hardware such as Oculus Rift, HTC Vive, and iOS mobile devices (support for Android ARCore coming soon). For example, you can build a virtual classroom that lets you train new employees around the world, or you can build a virtual environment that enables people to tour a building remotely. Sumerian makes it easy to create all the building blocks needed to build highly immersive and interactive 3D experiences including adding objects (e.g. characters, furniture, and landscape), and designing, animating, and scripting environments. Sumerian does not require specialized expertise and you can design scenes directly from your browser.

While this may sound like a new game engine, unfortunately it really doesn’t seem to be aimed at that demographic.  Instead Amazon seem to be targeting Sumerian towards sales and education markets.  Sumerian use cases given by Amazon are:

You are charged for the total storage size of the 3D assets you upload and store in Sumerian at the rate of $0.06 per GB per month.

You are charged for the total volume of traffic generated by your scene each month at a rate of $0.38 per GB per month. The total cost is the number of views your scene receives in a month multiplied by the published project size and the cost of $0.38 per GB transferred.

If your Host uses Amazon Lex or Amazon Polly, then you are charged for what you use. Each offers a free tier for the first 12 months using the service. Visit the Lex pricing page and Polly pricing page for pricing details.

You can learn more about Amazon Sumerian here.  It is currently in preview, requiring an Amazon account number to sign up.  If you are interested, the application form is available here.