Yesterday the Blender Foundation announced the release of Blender 2.7 RC, a preview build of the upcoming full 2.7 version.  This release is going to jump out at you immediately as they have started refining the UI.  Now sidebar actions are group in context sensitive tabs making the bar much less cluttered. 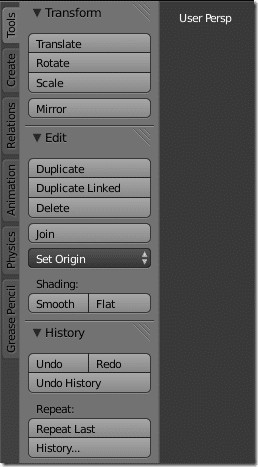 This is just the most obvious UI tweak, there were a number of other small changes under the hood.  Here are the release notes.

New features include initial support for volumetrics in Cycles, and faster rendering of hair and textures. The motion tracker now supports weighted tracks and has improved planar tracking. For mesh modeling there are new Laplacian deform and wireframe modifiers, along with more control in the bevel tool. The game engine now supports object levels of detail.

The first results from the new user interface project are also in this release, with dozens of changes to make the interface more consistent and powerful. This is also the first release of the multithreaded dependency graph, which makes modifier and constraint evaluation faster in scenes with multiple objects.

Trackers can now be weighted, to keep the result stable as feature disappear or become difficult to track. The plane track workflow was improved to be easier to control. Automatic feature detection was made more robust using a new detector algorithm.

The toolbar now has tabs to organize tools in categories. Multiple buttons can now be edited at once, for example for XYZ axes or color channels. Transform tools now have a mode to enter expressions and units. Other changes were done to improve lists, header menus, tooltips, buttons, menus and more.

The Laplacian Deform modifier was added to pose a mesh while preserving geometric details of the surface, and a new wireframe modifier allows you transform your mesh into a wireframe representation. The boolean modifier now supports ngons, and there are improvements to the bevel, screw and triangulate modifiers.

The bevel tool now offers more control over the bevel profile and results, and the knife tool was improved as well.

An important change that happened under the hood is the threaded dependency graph. This means that object modifiers and constraints, among other things, can now be computed with multiple threads taking advantage of multicore processors. This will be most noticeable with scenes that have many objects, or multiple objects with heavy modifiers. This is the first step in making the dependency graph in Blender more powerful.

The Blender game engine now supports discrete level of detail for meshes. For game developers, support for working with Photoshop PSD files has been added.

A new view navigation walk mode has been added, which has a control scheme as typically found in first person shooter games. This can be useful for game developers to navigate levels as if in a game.

The Freestyle Python API is an essential part that makes it a highly programmable NPR rendering engine. This API has been reorganized.

For a visual demonstration of some of the new features in this release, check out the feature videos created during the development of this release.

Several addons have been added and updated, including Node Wrangler (aka Node Efficiency Tools) and a new Sketchfab Exporter addon

In addition to the new features, over 560 bugs that existed in previous releases have been fixed.

You can download Blender 2.7RC on the Blender website.  If you are trying to figure out what the vc2012_preview versions are, these are builds compiled with the most recent version of Visual Studio.  This should cause some performance improvements, but as the name says, it’s a preview so your mileage may vary!