Oh joy of joys.  Tonight I get some nasty work off my plate and decide to wind down for some Diablo 3 action.  Initially I start encountering server problems and a quick check on their server status page shows that their servers are down.  Great.

So I let about an hour go by.  This being Diablo, I of course have to fight through a series of Error 37’s, but I eventually get logged in.

To be greeted by the message:

A new patch for Diablo III is available. The game will now close and apply the patch automatically. You will be able to continue playing after the patch has finished installing. 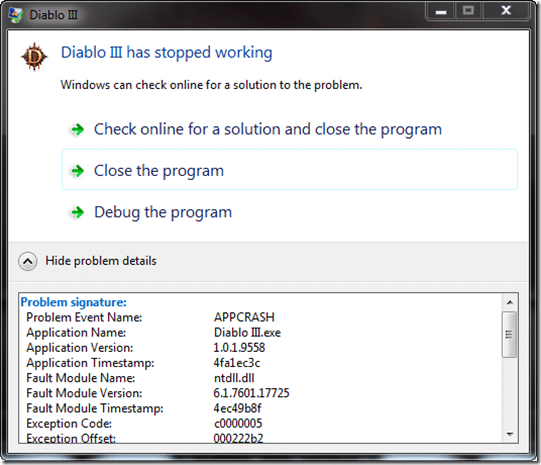 Lovely, “Diablo III has stopped working”.  Exactly what I wanted to see.  Then followed by this lovely screen: 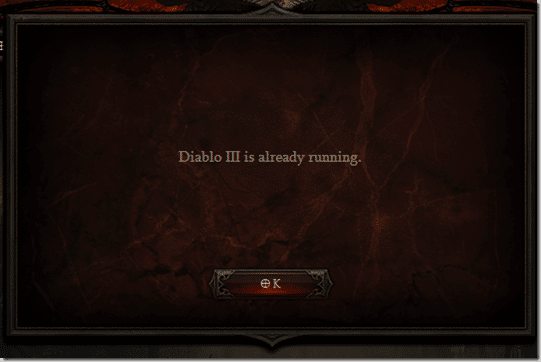 From my outside perspective, it appears the game patcher is trying to restart the game to apply a patch, but the game isn’t exiting, causing the version that is going to do that patching to die a horrible APPCRASH death.

Crash is being caused by having a client on a server at a different patch level.  For example, I ran the UK installer apparently, but I am playing in the America regions.  The patch has been deployed to the America’s but not the UK.  So when I log in to the American server, its sending me to the UK server to patch, and there is no patch available, so it crashes. You can check your install version by going to C:Program Files (x86)Diablo IIIData_D3PCMPQs.  If the folder is enGB and you are logging in to the American server, this is why you are crashing.

You will either have to wait for Blizzard to push the patch out to the UK, or re-download the game with the US client.  If you are constantly being logged in to the wrong servers, this is also probably the reason and solution.

And again… this is on my SINGLE PLAYER game, that I again cannot play online because of the stupid auction house, that I am never EVER going to use.

Let’s just say, as a non-WoW player, Blizzard to me is just another developer, one who is losing all of my goodwill fast!  For the record, I currently have no work around, except that is to wait for Blizzard to fix their damned game.

If I do come across a fix for the Diablo 3 patching loop of death ™, I will post it here.

EDIT:  Well it appears when I bought it from Blizzard.com, because I speak Queen’s English ( I am Canadian ), it gave me the enGB client!  This may be contributing to the crash, but it’s going to really annoy me if I have to download the entire thing again just to fix this!  I currently cannot select an English options other than enGB.

If I set my region to Europe, it doesn’t try to patch and the crash doesn’t occur!

The client they sent me is English(EU) this results in your patch server being enGB.patch.battle.net. So if I want to stop being sent to the UK servers, it appears I need to download the client all over again, this time with English (US) selected. You can check yourself by opening your .agent.db file, in my case located at C:Program Files (x86)Diablo III.  Since it’s name starts with a “.”, you may need to set “Show Hidden Files” in Explorer to true to be able to see it.

As you can tell from patch_url, it is setting me to international servers and launch_arguments.

I doubt this is the problem, but this would be why Diablo 3 keeps trying to send me to the European servers!

If you are finding Diablo 3 keeps sending you to the wrong continent, log in to Blizzard.com, check your client and see what language it is set to.  Hopefully I will find a solution that doesn’t require re-downloading everything.