Over the past couple months I have been working on a series of posts covering MonoGame with the intention of compiling them into an e-book when finished.  There have been a few preview builds of the book available to Patreon supporters (thanks by the way!).  Now however I consider the series to be complete so I am making the book available to all.  I will eventually be creating a more complete and formal homepage for the title but this one should work in the meantime.

Truth of the matter is, I had intended to cover a great deal more on the subject, but the level of traffic simply doesn’t justify the further expenditure of time.  That said, I leave the book at a state I think it should prove useful for anyone getting started in XNA or MonoGame game development, it is as comprehensive as any beginner XNA book currently available.  The book is composed of seven chapters:

An Introduction and Brief History 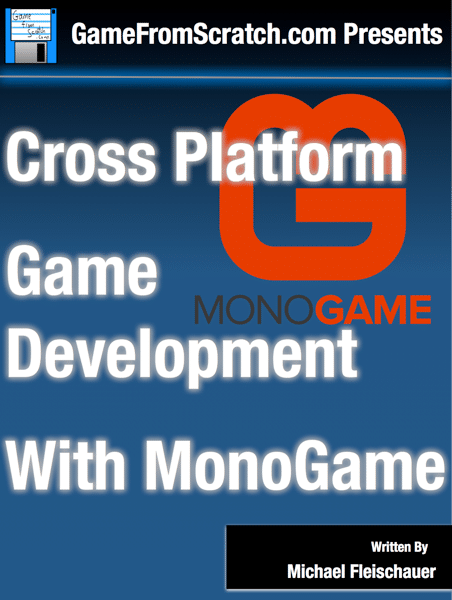 Getting Started with MonoGame on Windows

Getting Started with MonoGame on MacOS

Of course, the tutorials based here on GameFromScratch are still going to be available in addition to this PDF.  There is also a complete video tutorial series to go along with each chapter in the book available here.

With today’s release of the book, I also have published a github repository containing all of the source code used in the book.  This is a single Visual Studio solution containing each example as a separate project.  For some reason I don’t quite understand, all of the chapters are mismatched by one.  So for example the code in Chapter 8 on Github actually corresponds with Chapter 7 in the book.  Oops.

Alright, enough blathering, here is the book in PDF format.  I can make it available in other e-reader formats if requested.

EDIT: Here is an untested epub version of the book.

EDIT2: Now it has been posted on Smashwords as well, which should ultimately make it available from a number of sources.

If you enjoyed this free e-book and would like to see more similar free books, or would like access to books in development, please consider supporting GameFromScratch on Patreon.