This is a somewhat light-hearted series that looks at creating a complete game, from beginning to end, entirely on an iPad.  This means the code, all assets, art, design, audio… everything will be created on the iPad.  This series will rely heavily on the Codea Lua based game development system, but will also look at a 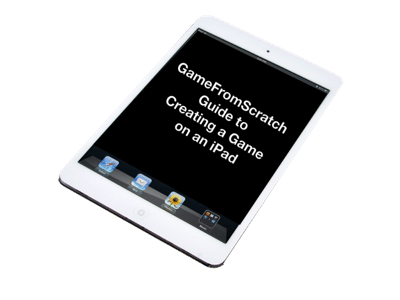 number of art applications, audio applications, and other tools needed to create a game.  Even if you aren’t interested in making a game using your iPad, pieces of this series will still hopefully be of interest to you.

This section is an overview of the series.  Basically it’s the paragraph of text you just read, just using many more words.  So, unless you are extremely bored, it’s pretty safe to ignore it completely!

Codea is the magic that makes this entire project possible.  It’s an all in one game development library, IDE, and Lua runtime.  Essentially it is the programming language, editor, and library that we will be using to write our game.  This post takes a look at what exactly Codea consists of and how it works.  For those that think reading is for suckers, there is also this snazzy video showing Codea in action.  By the way, Codea is pretty cool, if it was, I wouldn’t be doing this, would I?

Raster(Pixel) and Vector Art Programs on the iPad

A game without art is like a peanut butter sandwich without pickles… simply just not right!  This post looks at a dozen different art programs of all kinds available on the iPad.  Even if you have no interest in creating a game on the iPad, you may be surprised to find out how good the options for art creation are, especially for the price.  Seriously, if you already own an iPad, this may be about the cheapest way to create game art.  Oh yeah, I also created a video for this one too!

Our First Project — Creating a Spritesheet Class in Codea

Finally, we jump in with a bit of code. Here we look at creating a Spritesheet class in Codea, so you can predictably enough, handle Spritesheets! Truth is, it’s half a spritesheet class and half a demonstration, so you will have to do a bit of work to actually make it useful. It does however show you how to get started, add a class, and of course, how to create a spritesheet, sorta.

We talked about iDraw in our earlier look at iPad graphics applications. Here we take a detailed look at iDraw in action. In all honesty, this is just an YouTube video, the post is about as gratuitous as they get. The video is good though, or at least I like to think it is. Of course, I’m kinda biased.

One of the challenges of this whole thing is, what do I do when some functionality I need isn’t available? Why I create it of course! This part creates an application for posing and eventually animating a compound object built from vector graphics. Also, there are two very cool animate Gifs. That’s GIF no JIF. Stupid rename…