We mentioned a few weeks back that Godot 2.0 Beta was released.  Today we can remove the beta moniker from the release, the full blown release of Godot 2 is now here.  Major new features from the release include:

While for 2.0 core changes were not a priority, there are some nice improvements on this release!

Instancing is one of Godot’s best features. For this version it has been further improved. Previously, only the root node of a scene was editable. Changes to sub-nodes would result in data loss.

It is now possible to edit any children node of the instanced scene and have the changes persist. Even sub-instances of instances can be edited with persistent modifications. 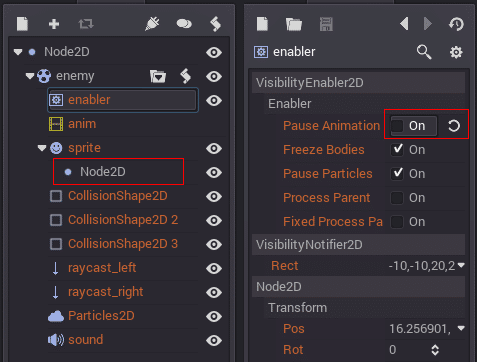 Begining Godot 2.0 scenes can not only be instanced but also inherited. This allows many interesting use cases such as: 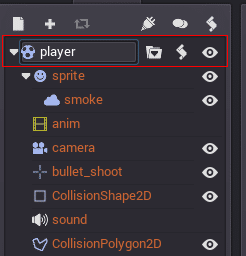 Godot supports the XML format for saving scenes and resources, but we had problems with it:

Having this in consideration, Godot 2.0 adds a new text file format inspired by TOML. This new format is descriptive (human friendly) when saving scenes, and Git/SVN friendly: 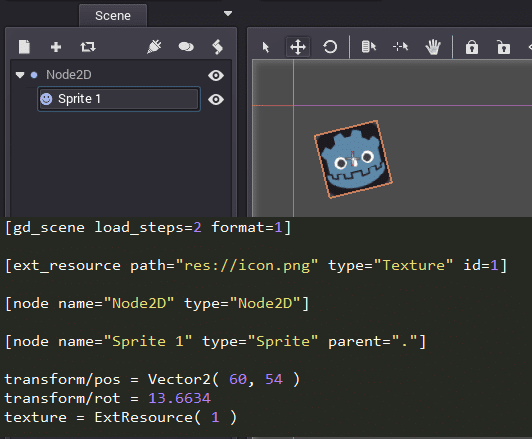 For 3.0, this format will be the only text based format supported, and XML will be deprecated.

Initializing class member variables can be quite of a hassle, code such as this is common in GDScript:

The ‘onready’ keyword allows initialization of class member variables at the same time when _ready is called, saving some code:

But doing this for autoloaded scenes can still be a hassle, as it has to be done every time a script is created. To ease on this, it’s possible to make an autoloaded scene or script a singleton variable (accessible at global scope) in the project settings:

All this, of course, working together perfectly with code completion.

The Editor part of Godot 2.0 is where most of the work was focused. The priority was to improve tools and make the workflow more efficient.

Godot 2.0 sports a new theme courtesy of Andreas Esau. It looks more professional and less confusing than the previous one. Many unneccesary icons, margins, arrows, etc. were removed to further clean up the visuals. 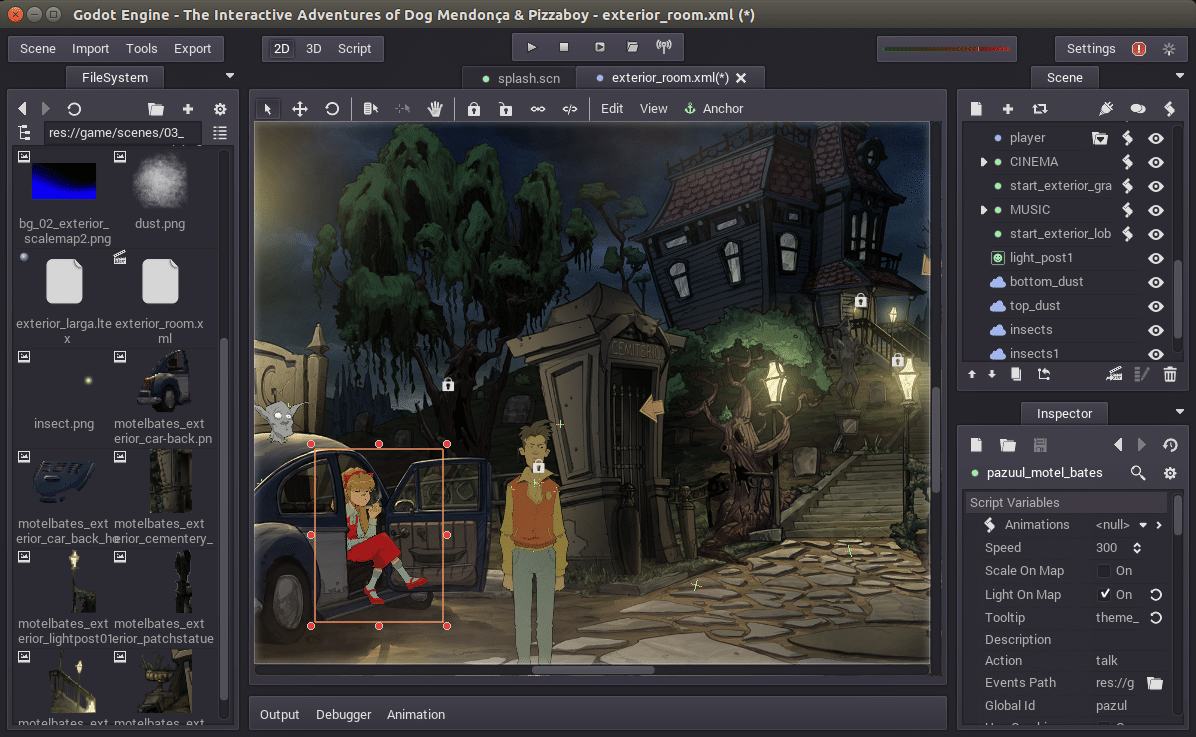 As a plus, dock panels (which were previously fixed on the right) can now be moved and rearranged.

One of the common hurdles with Godot was the overly simple file dialog: 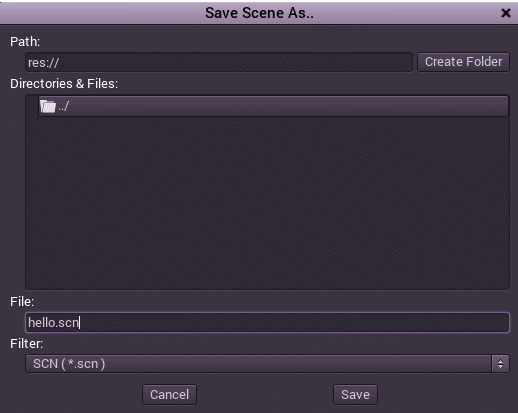 For 2.0 we have created a new one, which supports: 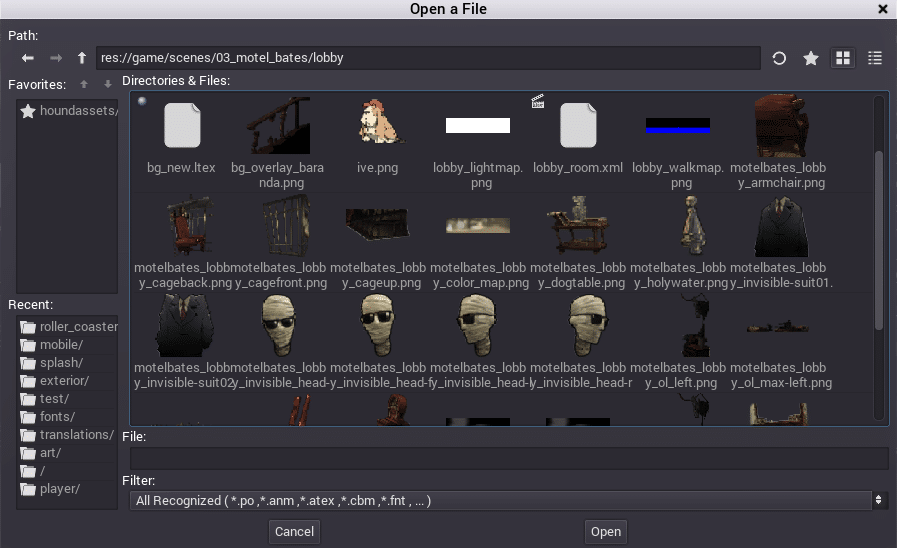 Godot used to have a primitive tree dock panel view with all the project resources. This was replaced by a more modern filesystem dock:

This new panel can show resources in both thumbnail and icon view (similar to File Dialog), but it also includes several tools.

By popular request, Godot’s new filesystem dock has tools to allow the user to:

Godot’s divide and conquer approach to making games relies on subdividing scenes in several sub-scenes, each with an identity or function.

Godot 2.0 improves upon this with multiple scene editing support, allowing several scenes to be open at the same time. Switching between them is painless and Godot also automatically reloads scenes when a dependency (instance or inheritance) has changed.

In Godot, tools appear contextually when a given node or resource is selected. This makes the UI flow fast and removes large part of the need to maually organize panel layouts.

This aspect of Godot was also improved in 2.0 with the introduction of a new bottom panel. On it, contextual editors can make a tidy appareance. Some of the editors are also always shown with persistent buttons:

Godot has the code editor integrated to the rest of the editors. Until Godot 1.1, scripts were opened contextually to the scene being edited but, as multiple scenes can now be edited, this is no longer possible.

To compensate, the new code editor now works more similar to an IDE, where scripts are just opened all the time. Switching to a scene will also automatically switch to it’s dominant script (script in the root node, where it’s most commonly placed), making the programming experience smoother.

The code editor also has many new features: 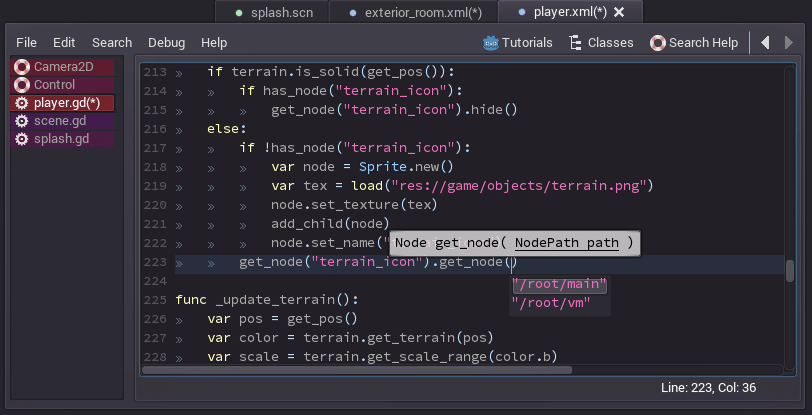 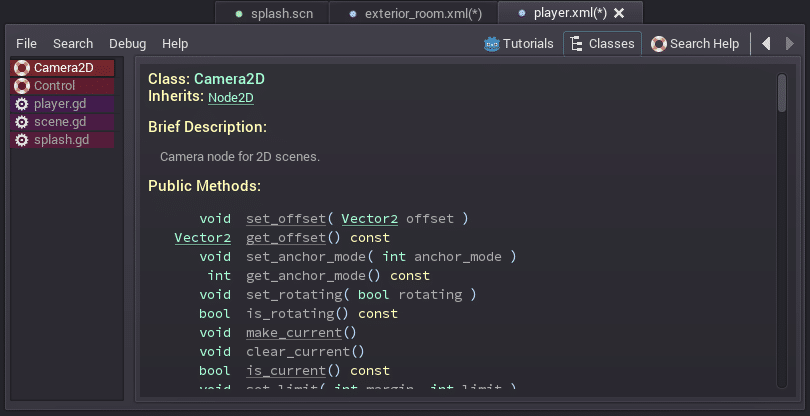 The debugger has seen many improvements too. A new addition is the reporting of run-time errors with proper notifications.

Godot is designed from the ground to attempt handling common crash situations by recovering and reporting an error. This is helpful in production games, as unexpected bugs that might commonly cause a crash will not make it fail. These errors, however, were silently being reported to stdout, so it was not easy to spot them. Added to that, given the debugger does not stop for them, having some context to understand their origin was difficult.

A new section “Errors” was now added which turns red when run time errors occur. Selecting or hovering the error will display a backtrace of script files that led to this situation.

Another new, useful feature is a new Video Memory debugger. This allows to see how much video memory is in use, as well as to discern which resources take up the most amount of video RAM.

It is also now now possible to debug a game running on an actual devices. Make sure to enable “Deploy Remote Debug” option in the remote options menu. If you have a device with Android 5.0+, Godot can take advantage and debug over the USB cable directly. 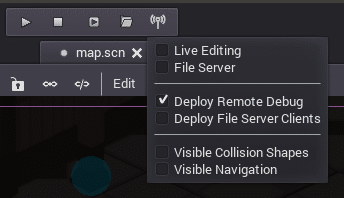 We added support for debugging collision shapes and navigation polygons, both in 2D and 3D, in run-time. Just select the “Visible Collision Shapes” and/or “Visible Navigation” options in the above menu to enable this. 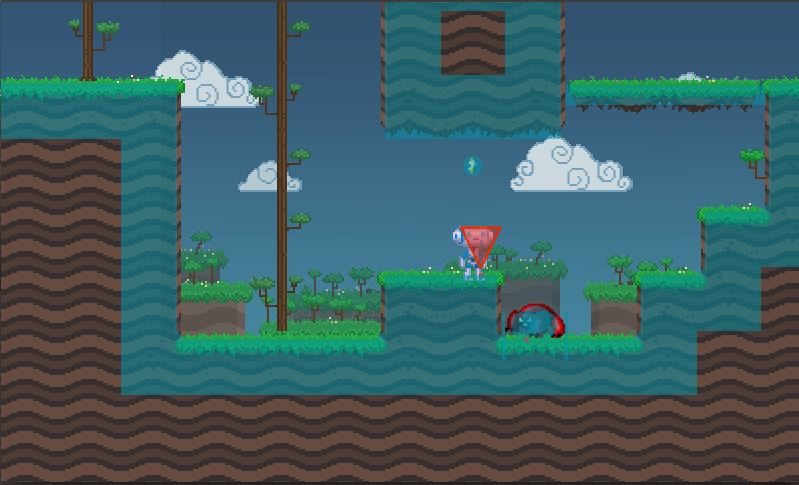 In the vein of larger game engines, Godot has now live editing support. The way it implements this feature is different though. Godot uses IPC to synchronize the editor state with the running game. This means that any change made to the scene being edited is reflected automatically on the running game.

While this approach to live editing does not allow easy inspecting into the game from different editor cameras (something it might be implemented eventually anyway), it has the huge advantage of allowing the possibility of editing a level while it’s being played (and avoid the edited state from being lost when the game stops). Just add enemies, move them around, change their properties, add colliders, platforms, tiles, etc. and everything is reflected instantly on the running game.

To enable live editing, just toggle it at any time from the remote options menu. 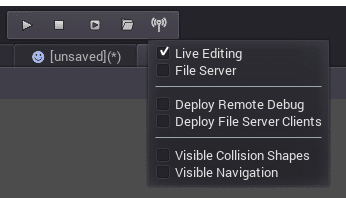 Video of live editing in action:

It is also possible to do live editing on an actual device! Just select “Deploy Remote Debug” together with “Live Editing” in the remote options menu: 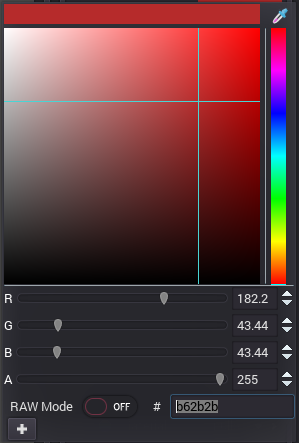 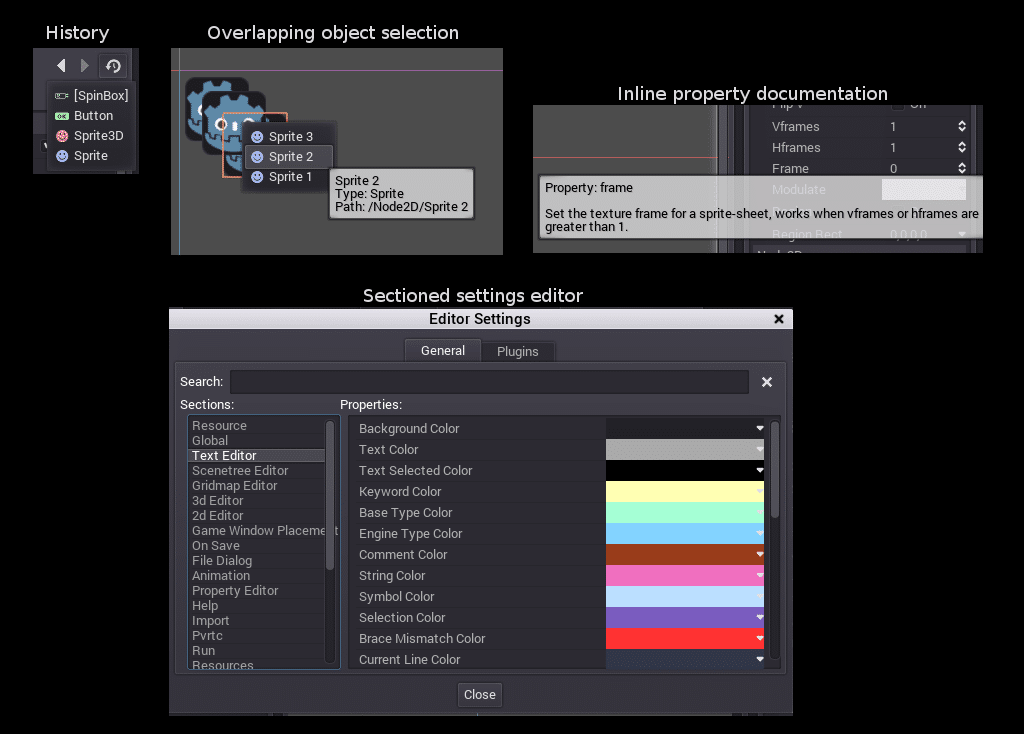 We know the weakest part of Godot is still the 3D engine and we plan to fully work on modernizing it. However, we feel there are several more urgent issues that need to be improved usability wise. Godot 2.1 will continue in the same vein as 2.0 and keep adding usability improvements. (Feel free to check the Roadmap ).