While I was away moving ( of which I am mostly done… except the living out of boxes and having no internet parts… ) a new version of Blender was released.  As I am a big fan, even if I am two days late, I feel the need to report it.

So, what’s in it for game developers?  Well, for most of us, not much.  Unless of course you are rendering your game in a cartoon style, in which case you will love the inclusion of Freestyle in Blender. 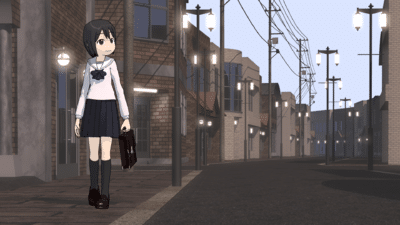 Freestyle is a non-photorealistic renderer ( NPR ), that has been around forever like BMesh, but has finally been incorporated directly into Blender.  The image to the left is an example of an anime style rendering performed using Freestyle.

This is just one example of the type of art that can be accomplished with Freestyle, although probably the most popular.  You can also render using flat colours, create a more blueprint like result, etc.

From the Blender description of Freestyle:

Freestyle generates 2D line drawing from a set of mesh objects. Mesh vertices, edges and faces are used to identify feature edges of interest to artists. The detected feature edges are then transformed into stylized lines through a number of stylization options. Unlike Blender’s good old Edge (Toon) option that only generates a raster image, Freestyle feature edges can be manipulated by means of geometrical information, for example by line length, angle formed with two adjacent lines, and distance from the camera. In addition, identified feature lines can be stylized in many ways, such as different line colors, alpha transparency, and line thickness. Straight line segments can also be transformed into fancy curves by adding random displacements and fitting to smooth Bezier curves, for instance.

You can learn a great deal more about Freestyle right here.

So, other than Freestyle, what else is new in this release?  Well, you can read the complete release notes here but a few stand outs are the new modelling tools ( Individual face inset, Poke Face and Knife Project ), as well as improvements to the Paint tools, motion tracking, node editing as well as the Cycles renderer.

You can download the new release for free right here.