RPGMaker, the seminal, um… RPG (role playing game) maker, is currently available for free on Steam over the weekend and available for a sale price of 50% off. 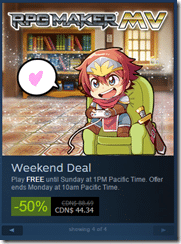 RPGMaker is a complete game engine and toolset geared towards making JRPG style games.  First released in 1992, RPGMaker has been used to make several commercial games such as To The Moon and the Aveyond series.  Up until recently scripting was done using the Ruby language.  However with the move to MV, the language was changed to JavaScript.  Another major feature of the MV release is the ability to target both iOS and Android.  One nice thing about RPGMaker is it ships with a ton of game assets that should ease the getting started process.

To go along with the free weekend sale, the RPGMaker folks have put together an introduction:

So you’ve downloaded the program, opened it up, and are seeing the Engine for the first time. RPG Maker is not hard to use, but at first glance, there is so much to do that it can be a bit overwhelming. That is why we’ve prepared this quickstart guide, to get you on your way to making your game, your way.