Physically Based Rendering, PBR, has pretty much taken the world of computer graphics by storm, and Allegorithmics is at the forefront of that movement.  Today they just released Substance Designer 6.  Substance designer is a tool for creating PBR materials.  Substance designer comes with three new major features: Curve Node, Text Node and 32-bit floating point compositing. 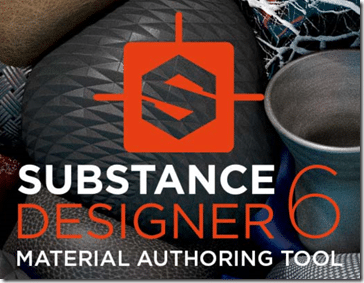 The Curve node allows you to define a curve profile to remap color data. In the context of Substance Designer you will find it particularly useful to define/sculpt height maps.

The Text node is pretty self-explanatory! It comes with dedicated effect filters like glow, drop shadow, and outline.  Note that the text input can also be exposed for dynamic changes in integrations! The integration plugins will soon be updated.

Another new feature of the release is Scan Processing:

New Scan Processing nodes allow you to create accurate scanned materials from a set of pre-lit photos. These photos can be shot pretty easily with minimal setup: all you need is a camera (or even a phone), a tripod and a flashlight or LED strip. Take 4 or 8 photos of the same surface with varying light angles, crop and feed them to the Scan Processor.

The filters will cross check the different photos and extract a pure albedo as well as an incredibly detailed normal map or height map, no tweaking required. It works even with shiny materials or metals!

Bakers have also been improved with the following new functionality:

The following is a video of the new functionality in action:

You can read more about the release here.