This post is going to look at getting your Moai app to run under NaCL, which is Google’s mechanism for allowing you to execute C++ code within Chrome.  There are a number of restrictions, but fortunately Zipline have done most of the hard work for us.

First is a matter of locating it.  The source for the NaCL host is located at moai-install-dir/scons/

First off, if you haven’t already installed Cygwin, I highly recommend that you do.  The Android  build process basically requires it, so I am going to assume you already have it.  If you don’t, refer to the Android installation guide Cygwin section for details.

You also need to have Python 2.6 or 2.7 installed.  To check, fire up Cygwin terminal and type:

If you get an error that the command wasn’t found, Python isn’t installed so let’s install it.  The easiest way is to run the Cygwin setup application, then click Next next next until you get to the Select Packages screen.  In the search box enter Python, in the results expand Python and select python: Python language interpreter.

Make sure you don’t have any Cygwin Terminal windows open, then click Next and let Cygwin do it’s thing.

Now that you have Python installed, we need to download the native client SDK. (That’s the direct download link btw… )

Save it somewhere you can remember.  Open the archive and extract the folder nacl_sdk.  I went with c:devnacl_sdk, but choose whatever you want, just be sure to update your paths accordingly.

Now open a Cygwin terminal window and change in to the nacl sdk directory, which in my case is:

Now we want to run the installer/downloader.  In the terminal window type:

Even though the current version is 22, you need to install 17, as it ships with developer tools Moai depends on.  For some reason, Scons has been removed from future versions.  That is what the above command does, gets and attempts to install pepper version 17.

YAY!  Don’t worry, it’s pretty easy to work around.  The installer is trying to execute a program that doesn’t exist, but the installer was downloaded as part of the above process.  Go in to the folder sdk_cache and locate the file naclsdk_win.exe and run it.  When prompted for an install path, install it to your NACL_SDK folder/pepper_17.  In my case that means C:devnacl_sdkpepper_17

Now we need to set an environment variable with the path to the NACL SDK.

Are we there yet? Nope… it’s FMOD install time

Close… one more dependency left… FMOD.  FMOD is a commercial audio system ( AKA, if you ship a product, you’ve got to pay to use it ).  With most of Moai, you can get by using the free Untz audio system, but with NaCL, FMOD is required.  So you either have to gut the FMOD library from the build dependencies or download and configure FMOD.  I’ve opted for the second ( audio is after all, kind of nice! ), but either option is open to you.

Head on over to the FMOD download page and download the archive for FMOD for Google Native Client. Unfortunately you need to download a version that supports the same Chrome version as Moai (17).  The following direct link will download the correct version. (Direct link)  IT IS VERY IMPORTANT YOU DOWNLOAD THIS VERSION…. just so you know.

Save and extract that archive somewhere.  This file is a tar.gz, so if you are using a program such as 7zip, you need to extract it, then extract the file you just extracted.  I took the resulting folder, renamed it fmodchrome and copied it to c:dev.  The resulting directory should look like: 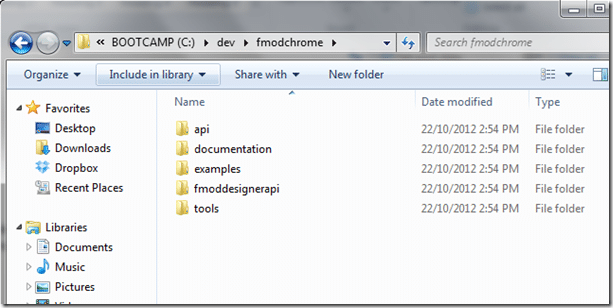 Now we need to set yet another environment variable, one named FMOD_CHROME_SDK_ROOT and pointing at this new directory.  Once again in Cygwin terminal type:

Once again, you need to exit and restart Cygwin terminal for this variable to take effect.

At this point in time, there seems to be a problem with the scons build script so that the paths ../3rdparty and ../src aren’t working, at least, not on Windows.  The following is a brutal hack, and I will post a better solution when I come up with it.  For now, we simply copy all the source into the scons folder.  Copy the contents of [moaifolder]/src, [moaifolder]/3rdParty and [moaifolder]/scons/src to the scons directory.

Now cd in to the maoi scons directory, on my pc /cygdrive/c/dev/moai-dev/scons and run

Hopefully all went well.  If you get errors… something didn’t go so well… if you want, just skip ahead and download the version I compiled.  You only really need the build process working if you intend to alter the host.

Now copy the following files to a new folder:

This is your Moai Host ready to go.

If for some reason you couldn’t get your host to build, you can download mine.

Packaging your app to run in Chrome

Now you need to package your application up into Chrome friendly goodness.  The steps are fairly straight forward

In the folder you copied the .nmf and .nexe files, create a new file called manifest.json here is what I put in mine:

Now you need an html file to actually host your application. As you probably guessed by the manifest file, I called mine moai.html:

Finally you need your Moai application ( the lua bits ).  Just copy your project sources into the same directory, just be sure a file is called main.lua, this is your app entry point and will automatically be called the the host.  Here for example is my folder: 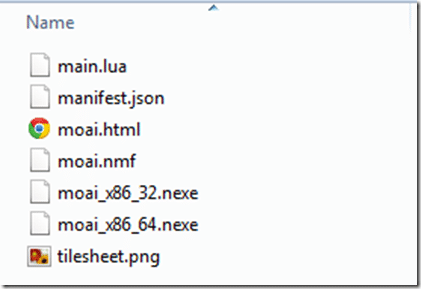 I simply grabbed the sources from this tutorial.

Configure Chrome to run your app

Scroll down and enable Native Client as shown by the arrow. You need to restart Chrome for this to take effect!

Now you need to add your application.  To do this, in Chrome, drop down the Menu and select Tools->Extensions.

In the browse dialog, navigate to the folder you’ve saved everything in then click OK.

Your extension should now be installed.  Launch a new tab ( CTRL+N ) in Chrome, and at the bottom of the screen, select Apps

Your app icon should appear on the page: 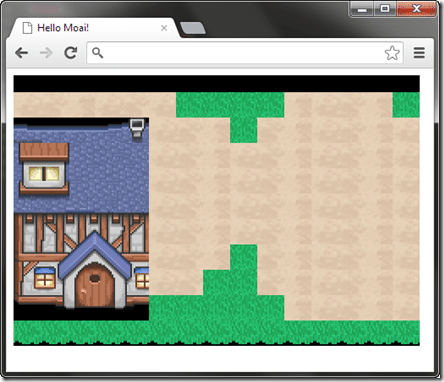