In the recent release of Blender 2.78 Blender received a new feature that’s quite cool, B-Bones or Bendy Bones.  This post is going to take a look at how you can use this new bone option.  So what exactly is a b-bone?  Simply put, it’s a new bone type in Blender that allows itself to be subdivided and bend as a smooth spline instead of as a single entity.  This enables you to use fewer bones to control curved meshes such as a tail or eyebrow.  Don’t worry, it will all make sense in a second.

Let’s first take a look at a regular bone and a b-bone side by side:

The bendy bone on the right still only uses two bones in the armature, but the b-bone has additional detail enabling a smoother bend and tighter controls.  Now let’s look at how you use Bendy bones in the first place.  At this point I am going to assume you already know how to use bones in Blender.  If you don’t be sure to check out either this tutorial on animation in Blender.

To use Bendy Bones, create an armature like normal.  Then head over to the armature tab:

Now under display make sure B-Bones is selected:

Now you can control each individual bone in the Bones section: 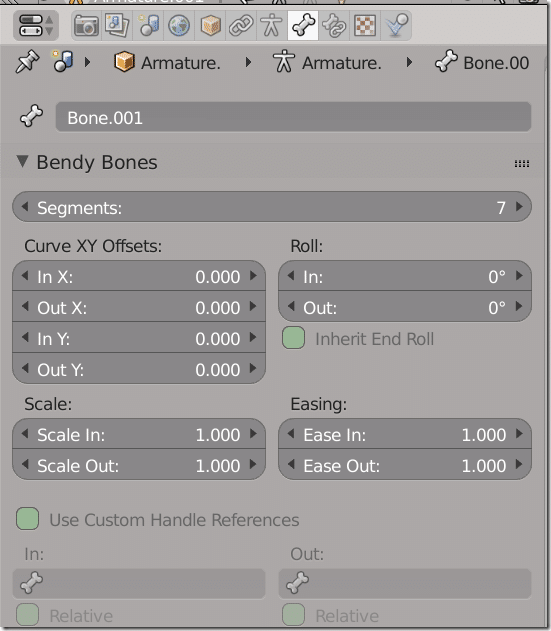 Segments determines how many sub-divisions occur within the bone:

The remaining controls enable you fine tune control over the spline controlling the sub bones.

Bendy Bones are a (pun intended) flexible way of adding detail to bending bones without having to create several more bones.  There is a catch however!  Outside of Blender most game engines are going to have no idea what a Bendy bone is.  For example, you can see (by the pinching) that the Bendy Bone is ignored completely once imported into Unity.

It would be awesome if they added the ability to export B-Bones that automatically split into multiple bones.  The only alternative is to get B-Bones support added to the various game engines, a much less likely result.

If you want more information on the math behind Bendy Bones, be sure to check out this very technical post.