When Cocos Creator 2 was released, a major new feature was the new 3D renderer under the hood.  The 2.1.1 release starts to take advantage of that new functionality with a new 3D scene editor, a game preview panel, new lighting and 3d primitive support and more.  If you are interested in learning Cocos Creator, be sure to check out our tutorial series available here.

Details of the release from the Cocos Creator forum:

Since the release of Cocos Creator 2.1.0, we have received a lot of valuable suggestions from users. Based on previously announced plans, we will continue to speed up the iteration of the v2.1 series to implement user suggestions as quickly as possible. At the same time, in order to prevent these changes from affecting the stability of old projects, we only recommend upgrading projects with 3D requirements to v2.1. Other projects can continue to use v2.0, and wait until v2.2 is released before upgrading. This v2.1.1 upgrade mainly supports 3D scene editing, camera preview, lighting system, and also incorporates the latest 2.0.x changes.

The Scene Editor allows you to switch to 3D editing mode with one click, making it easy to edit 3D objects, cameras, and lights. See the 3D Scenes document 4 for details.

A separate preview panel has been added to visually preview the images seen by the camera during scene editing. Panel Open: Main Menu → Panel → Game Preview, the preview panel can be placed in a separate window or dragged into the main editor window.

A Light component has been added to lay out lights in the scene, and a shadow effect can be set in conjunction with MeshRenderer. See the Light Source Component Reference 2 documentation. 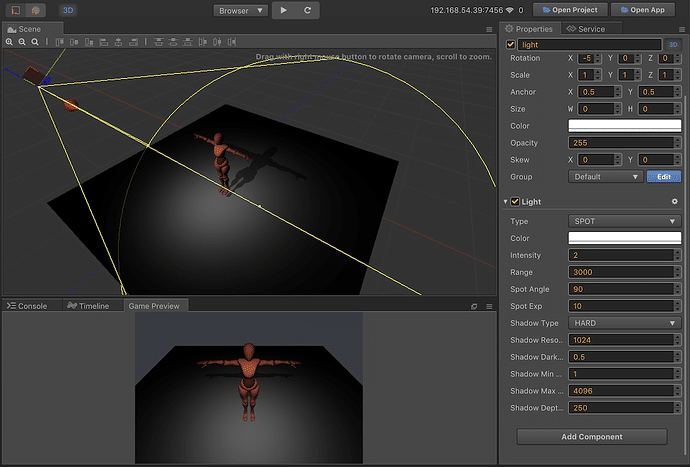 A new LabelShadow component has been added to add a shadow effect to the Label component, similar to the LabelOutline usage. See the Label Component Reference documentation.

Added support for material systems, allowing users to create Material and Effect (Shader) resource types. It should be noted that the current material system is mainly provided to the internal use of the engine and is only for developer preview. We plan to upgrade the material system in v2.1.2, however it will not be back-ported to this version.

See the new 3D functionality in action in the video below.