Scirra just released information on their upcoming Construct 3 release and I have to imagine the response isn’t what they were hoping for.  Construct is a codeless game engine that ultimately generates HTML5 behind the scenes.  There are two major changes to Construct 3: 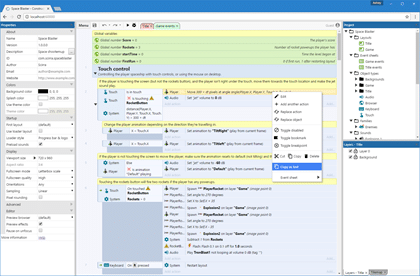 Details from the original announcement:

Construct 3 works in Chrome on Windows, Mac, Linux, and Chrome OS. There’s nothing to install — it’s as simple as visiting a website. There are too many new features to list here, so we’ll be posting regular updates over the next few weeks going in to more detail. However we’ve designed it web-first, with features like cloud save, remote preview, integrated WebFonts support, native-grade WebGL rendering, and much more. But don’t worry – it’ll still work fine when you go offline, even with an intermittent connection, and you can keep your projects offline too if you prefer. And as we promised, Construct 2 projects import with high fidelity. You won’t have seen anything like this running in your browser before. And we’re nearly ready to share what we’ve created.

Moving software to the web changes everything. Consequently we’ve had to make one change to the old way of doing things. As with the vast majority of web-based services, Construct 3 licenses will be based on a subscription rather than a one-off payment. We also know many existing Construct 2 users will be thinking about upgrading. Here’s a summary of how pricing and upgrades will work.

A public beta of Construct 3 will begin by April. At first our focus will be on testing, but we aim to make the full release by summer. We think you’ll love it.

Judging by several of the comments in response to this announcement, the community is not exactly pleased:

It’s not all negative though, there were a few positive comments in the mix:

One major point of contention is the browser based nature and the requirement to be online, to which the Construct team responded:

Today, Scirra followed up with another blog post actually previewing upcoming changes in Construct 3.  (Personally I would have lead with this….)

The Construct 3 interface has been redesigned from the ground up. We’ve kept many familiar and useful aspects, like the panes layout and the Properties Bar. There are also some significant differences. We’ve aimed for a simplified, minimal design that reduces clutter and helps you focus on your content. The ribbon has been condensed down to a toolbar with just the most essential features. Everything else is now under the main menu button.

Being browser-based, the UI style can be modified using CSS. We’re keen to add a custom theming system to allow anyone to edit the appearance!

Near the top-right corner is the user account menu. In this screenshot it’s showing a guest user who hasn’t logged in. You’ll be able to log in to Construct 3 with the same account you use on the website. This makes it dead easy to use Construct 3 on any computer, at home, work or school. Remember, there’s nothing to install! We can’t wait for you to try this.

This screenshot was taken on a 4K high-DPI display. The high-DPI rendering in Construct 3 is flawless: every detail scales perfectly. The icons for example are all SVG, which means they scale perfectly to any size or detail. The icons have also all been redesigned with a modern flat style like Google’s material design. The Layout View also works perfectly with high-DPI displays, and also features zoom-to-mouse, a greater zoom range, and native-equivalent rendering with WebGL 2. Also note the lack of a status bar – instead status appears when it is needed, and in the right context, such as inside the Layout View pane.

The Properties Bar has also been reworked to be easier to use with extra conveniences. For example you can click the “…” button by the project description to edit the text in a larger window. Checkboxes are used instead of on/off dropdowns. You can type calculations like 1920/2 which will set a value of 960. You can even use some system expressions like sqrt(64). Number values can be dragged smoothly with the mouse and instantly show the effect in the Layout View.

You might be wondering how we handle features that have previously required external software like Java for the minifier, or PNGCrush for image recompression. We didn’t want to settle for fewer features in the browser, so we created a suite of equivalents, several of which are compiled to asm.js for near-native performance. Then we went a step further and created a scheduling architecture that uses Web Workers run tasks in parallel across all available CPU cores for maximum performance. This all ensures you can do everything in the browser – not just a subset or “lite” version, it’s the real deal.

Can I work offline?

We want to be absolutely clear on this – Construct 3 will work offline! We’re using the latest Service Worker technology to download the entire app the first time you visit it. Every time you visit after that, it will load directly from disk. So you can be offline, or have an intermittent connection, and you won’t even notice – Construct 3 will keep working. We recognise forcing users to be online would be a significant inconvenience for many users, so we’ve worked hard to make the sure the offline or “lie-fi” experience is perfectly smooth.

You can of course also keep your projects offline if you prefer. We think many people will find it convenient to save and load from the cloud, especially if you use several different devices. However this is not required – you can still save and load projects locally, as you can with Construct 2.

In future we are also planning desktop builds of Construct 3 for Windows, Mac and Linux. These will work much like Construct 2 does now: you download and install the software, can copy it to a USB drive, and so on. These versions will also cover the surprisingly small featureset that can’t be covered in the browser, such as saving a folder-based project to a local folder, and better copy-and-paste support. This allows you to take Construct 3 to a computer that is permanently offline, for example.

So, what do you think of the changes to Construct 3.  As was illustrated recently with Unity, many people find subscriptions completely abhorrent.   I also know many people strongly dislike browser based tools as well.  This combination is a bold choice, but one that is sure to alienate a portion of their user base.  The question remains is… how much?