Version 5 of the CopperCube engine was just released.  In their own words, CopperCube is:

CopperCube is an editor for creating 3D apps, games and 3D websites. Import or create your 3D models, set camera controllers, materials, behaviors, click ‘publish’ and your app is ready. Create everything from simple model viewers to full 3D games. As WebGL websites, Flash .swfs, Mac OS, Windows, or Android apps. You can do all this without programming.

The following are the release notes of the new features in Version 5:

The editor now includes a way to create and edit terrain. There is also a terrain generator, completely with trees and grass. Terrain can be drawn with height painting tools directly in the editor, textures can be painted quickly with automatic texture blending into the terrain. There are also tools for placing grass and bushes, and for distributing meshes automatically over the terrain. 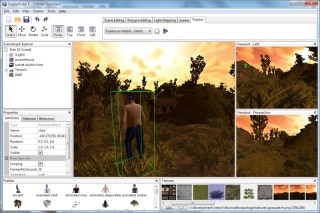 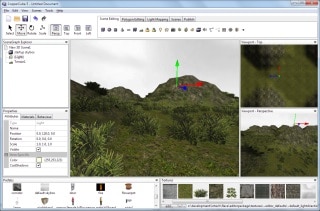 …and many other changes:

A trial version is available for both Windows and Mac.