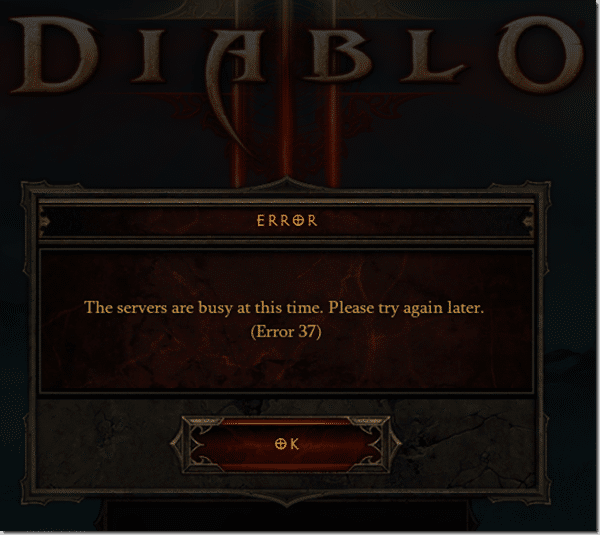 If you are going to make your game require an always on internet connection, especially for the single player game, you damned well better have stable servers!

Diablo 3 have blown it pretty big time, and things don’t seem to be getting that much better.  On the bright side, in the face of all of these Error 37’s, D3 hasn’t really affected my productivity.

If anyone but Blizzard pulled this stunt, their game would be getting 0 star reviews and shamed into oblivion.  I am curious to see how Diablo ends up being reviewed.  The worst part is, Diablo 3 is a damned good game making suffering these annoyances worthwhile… just.

What *REALLY* pisses me off though… cache my damned password!  It’s annoying enough having to deal with these errors, but having to re-enter my password every time I hit an error 37, that’s just salt in the wound!  Blizzard, if you are listening to your fans, if you can’t fix your servers, at least cache the password field!

So, if you are here killing time between Diablo error messages, could I suggest a game programming tutorial or two… 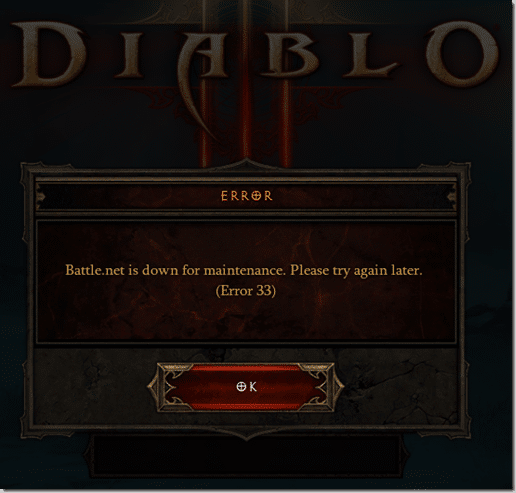 Why oh why did I complain… I angered the gods, who invoked their wrath in the form a hithero unheard of Error 33.  Battle.net is down for maintenance.  Please try again later (Error 33).

I’m pretty tolerant of DRM, I understand the motivation behind it, but this DRM that supposedly isn’t DRM, well it’s about the worst I’ve dealt with since HoMM6.  Actually it’s worse, as I could still at least play HoMM offline during the outages.

I hope every other game developer out there is taking note of the Error 37’s and 33’s and realizing what a mistake always on internet connections for single player games is!  I won’t buy another one with this feature, that’s for sure.

Oh, and if you are here from Google looking for a way to fix Error 38’s, sadly you can’t.  That ball is completely in Blizzards court.  Until they fix their servers, increase capacity or implement an offline mode ( very very unlikely ) I am afraid to say these errors are going to be a fact of Diablo life.