Ever wish you could go back in time to the days of 8bit computing, when coding was simple and pixels were large?  Thanks to the rise of Fantasy Consoles, this process is easier than ever before.

So what exactly is a fantasy console?  Basically it’s a virtual console with a complete development environment.  The console is designed to be 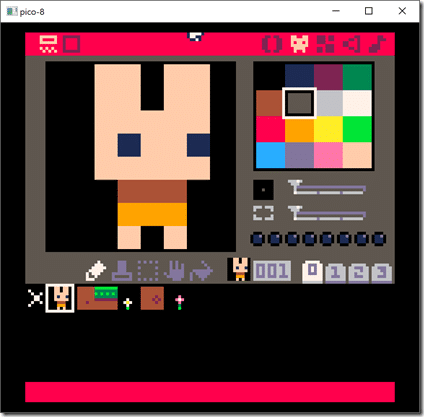 intentionally limiting, much like the primitive retro computers of the 8bit era.  Generally each also comes with a code editor, programming language (Lua), tile and world editor and some form of music composer.  This gives you a very focused, simple and constrained programming environment to work with.  You’d be surprised how striping away all the modern trappings enables you to focus on a single concept… fun.

PICO-8 is the application that seemingly launched the entire fantasy console movement.  The hardware it emulates provides a 128×128 pixel display, support for 4 channel audio, 128 8×8 sprites and 32k console/disk sizes.  It is PICO-8 illustrated in the image to the right.  In addition to the virtual machine, it also provides a code editor, sprite editor, map editor as well as music and sound editors.  It is available for $15 USD.

TIC-80, or Tiny Computer, is very similar in concept to PICO-8, with slightly less restrained virtualized hardware.  In this case it provides a 240×136 display, up to 256 8×8 foreground and 256 8×8 background sprites, 4 channels of audio and a 64kb disk/console size.  Tic is open source with the code available here.  TIC-80 also provides a VM, code editor, sprite editor, map editor and music/sound editors.

Another open source option, LIKO-12 is heavily inspired by PICO-8, built on top of the LOVE game framework.   LIKO is currently less feature complete than the others, lacking many of the editors others provide.

Perhaps the most interesting of the options out there, certainly the most polished from a UI perspective, PixelVision 8 is heavily inspired by PICO-8 witha  major twist.  PixelVision aims to emulate the development experience of real world hardware such as the NES, Gameboy and SEGA Master System.  It also enables you to customize the capabilities of your target platform.  It also contains several built in editors for graphics, music and code.  Currently it is only available for purchase for $15USD, although a free version is in the works.

You can learn a bit more about fantasy consoles and go hands on with PICO 8 in this video, which is also embedded below.