At the annual Oculus Connect developer conference, there have been several announcements on the VR front.  First is a pretty massive price cut to the existing Oculus Rift bundle, the second such price cut, driving the price down to $399 USD.

Summer of Rift had a major impact on the VR industry, and the community’s response showed that the appetite for best-in-class VR hardware and games is stronger than ever. We want to continue getting VR into more people’s hands, so we’re permanently lowering the price of Rift to $399 USD.

Each Rift bundle comes with Touch controllers, sensors, and six free apps that give you hours of entertainment including Epic’s arcade shooter, Robo Recall, and our creative tools, Medium and Quill.

In addition to the price cuts, they also announced an all new Oculus device, the Oculus Go.  It is binary compatible with the Gear VR.  Essentially it seems to be a GearVR without the phone requirement and built in speakers.  Available for $199USD, it also comes with a controller and will certainly 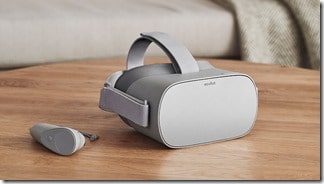 Our first standalone product is Oculus Go—the easiest way to jump into VR. It ships early next year, starting at $199 USD. It’s awesome for watching movies or concerts, playing games, or just hanging out with your friends in VR.

This all-in-one device makes VR more accessible than ever and represents a huge leap forward in comfort, visual clarity, and ease-of-use.

The headset is super lightweight, and the new fabric used for the facial interface is soft and breathable.

Oculus Go also ships with integrated spatial audio. The speakers are built right into the headset, transporting you straight into VR and making the headset easy to share with someone else. If you need it, there’s also a 3.5mm headphone jack for private listening.

Gear VR and Oculus Go apps are binary compatible, and they share the same controller input set—that means developers building for Gear VR are already building for Oculus Go. As an added plus, the best of our mobile VR content library will be available to everyone on day one.

Oculus Go pushes the envelope of what’s possible at such an accessible price point, and we can’t wait to share more early next year.

They also announced the open sourcing of the Rift DK2.

Today, we’re excited to announce the open source release of Rift Development Kit 2 (DK2). Our progress since the release of DK1 has been thanks in no small part to this community working tirelessly alongside us. We’re doing this both to preserve and share what we learned about VR in the early days, and to let anyone use the design in their own projects.

The open source release of the DK2 hardware follows on from our earlier releases of Rift DK1 and Latency Tester. This includes schematics, board layout, mechanical CAD, artwork, and specifications under a Creative Commons Attribution 4.0 license, and firmware under BSD+PATENT licences. We present a guided tour of DK2 for those interested in digging in deeper.

All told, a pretty big day for VR.  I’ve long held that the future of VR is a standalone device, untethered from a computer.  Hopefully the new Oculus Go solves many of the GearVR’s thermal issues and has a serviceable battery life.  VR is a great experience, but when its limited to 15 minute intervals, it kind of loses something!