One of the biggest challenges that indie game developers face is exposure.  Unless you have a publisher, getting your game in front of people is often a matter of luck.  Without massive advertising budgets, ads are very often outside of our reach.  With all this in mind, when I received yet another spend $25 get $100 promotional offer from Google, I decided to give Adwords a shot.  Granted, I was promoting a website instead of a game, but ultimately that just means I have a bit more data available.  Another aspect is the money I spent.  I set my CPC (cost per click) extremely low.  Under 5 cents in fact.  This is farrrrrrrrrr below what Google recommends as you will see shortly.

One piece of advise right up front, if you are being a spend thrift like me, the very first thing you want to do is target your traffic and turn off mobile results.  My first days of action almost 100% of my traffic was nearly useless, feature phones from non-English speaking countries.

If you are unaware of Adwords, they come in two forms, in search results on Google, and on partner sites.  Basically you write a simple text based ad and pick the keywords you want to target.  Key phrases is actually a more accurate description, but once you’ve specified a couple Google does a good job of giving you additional suggestions.  Your ad either runs on Google search results, or in ads on “partner” sites.  The second greatly increases the liklihood of your ad being shown, but as you will see in a moment, seems rife with fraud.

I personally decided to set up two different ads, one targeting my Unreal Engine tutorial series, and the other targeting my tutorials in general.  My ultimate and ideal goal would be for traffic acquisition costs to be lower than ads clicked by acquired traffic.  If you were publishing a game, obviously you would use a much different metric…  game installs, or game sales.  Fortunately using a combination of Google Analytics and Adwords, you can track this all fairly well.  Unfortunately, the results suck.

Here is an example of the ad I created:

You set your daily budget, your maximum click amount and all your details.  I also highly recommend you geo target your ad to target only regions you are interested in.  Simply targeting en-US seems to be completely ineffective.

Myself, being both cheap and broke, set a daily budget of $5 and a CPC maximum of $0.05.  You can have Google automatically set the price for you, if you fancy going completely broke.  Here is the performance of that ad, at those values today: 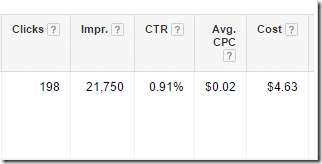 My ad was shown to 21,750 people with about a 1% click through rate.  Frankly getting 200 clicks for under $5 is an absolute bargain, almost impossible to replicate.  So, how effective are those clicks?  Well… that’s where it gets bad.

This is my most recent paid traffic, as shown by Stat tracker ( not a Google product ).  This represents about the last hour of paid traffic and the results.  Notice a few things here?

Right off the hop, the first one, 9 clicks, 9 views, no time on site?  Most definitely fraud.  Google has algorithms to detect and compensate you for fraudulent clicks in theory.  In reality, you probably just wasted about 18 cents on that traffic.  In fact, look down the right hand side in generate…  “No Visit Time”.  That is not encouraging.  Basically of all those visits only one might be legit and even then they spent less than a second on the site.

In fact, the same can be said for the entire campaign so far.  Here are results from Google Analytics and they aren’t good:

When clicks exceeds sessions, something is seriously broken.  A 90% bounces rate and a 1.17 pages viewed is appallingly bad.  In all honesty, it feels like the vast majority of traffic is in fact fraudulent.

Now of course, I am also setting a comedically low bit at 5 cents per click.  Thing is though, I am spending peanuts and don’t really care how many impressions I get ( as long as it’s > 0 ), so I can go cheap.  Google will however show you how much it recommends for you to make a “front page” result.  That is, the suggested cost to have your ad shown on page 1 of Google search results for the targeted key word, and the results can be shocking… 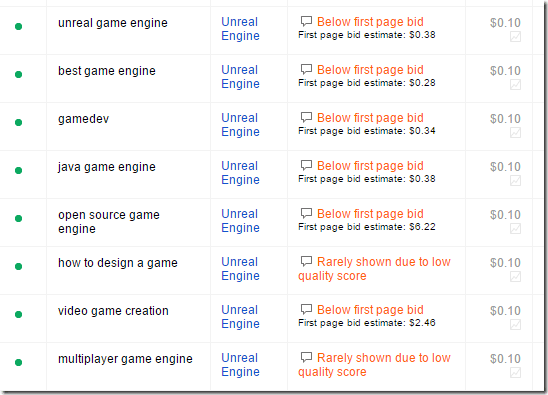 So, how has my experiment worked thus far?  Well, not worth a damn actually.  Here is a report showing the Adsense revenue on those 3,319 clicks…

So should you consider Adwords to advertise your game?  It may be worth trying, especially with a $100 free promotion, but I’ll certainly not be using it again.  To me frankly, the entire thing feels like a scam.