For a point release, this one’s pretty good. 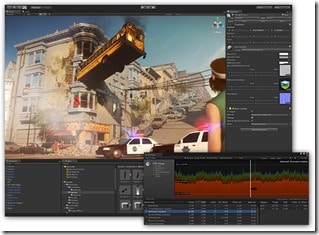 As mentioned in the title, probably the biggest change is the addition of 3 new platforms, Windows 8 ( as in the app store ), Windows Phone 8 and Blackberry 10.  Windows Phone 8 “Pro” is available free to Unity Pro subscribers.

Probably the biggest new feature isn’t new at all.  A number of previously “pro” level features are now available free.  Nav mesh baking ( used for AI pathfinding ), realtime shadows and text based serialization of assets for integration with version control have all become free features.  Those are perhaps the most cited missing features from the “basic” version, so if you are on a budget, that’s great news.

Other big features include:

Of course, this is just a highlight of the features added, you can check them all out here.  Or of course you can just go ahead and download it, as all Unity basic versions are now free.