As a bit of a throwback to the 1990s, I on occasion make use of animated gifs on this site.  Here is an example post making use of animated gifs. When you have several simple clips required to illustrate a point, and a series of images would take up too much space, animated gifs can be your best friend.  Of course you could host the clip on Youtube, but first off, embedding dozens of YouTube videos in a single page can cause some browsers to go on strike.  Additionally, who wants to watch a 3 second video?  One of the biggest downsides to making animated gifs like this is that frankly, it’s time consuming.  I generally created a series of screenshots using IrFan and compose them together into an animated gif using The GIMP.  I describe my process here under the poorly titled How to creating animated gifs.  Generally it would take 20 minutes or more to create a single image.

I tried a number of simpler processes that made use of video; some local applications, others websites you upload your video to and they make it into a GIF.  The universal problem, they give you very little control and end up generating either horrible quality or MASSIVE images.

Now that I am authoring these posts more from Mac, and felt the need to make another animated gif but no desire to go through the entire process again, I decided to check if there is an easier way, and there is…

It’s one of those little 5$ utilities that will literally save me hours.  When I first fired it up I was a bit confused, as there is no app, nor an icon.  You need to go up to the menu and select File->Open.  At this point in time you are left asking… open what?  The answer of course is a video.  This is a non-inuitive start to what ended up being a very intuitive program.

So I needed a video to work with.  I simply loaded up QuickTime Player and did a few seconds of full screen capture.  I export that video then open it in Gif Brewery.  Then I am finally presented with a UI and it’s smooth sailing from here.  Here is the UI in action: 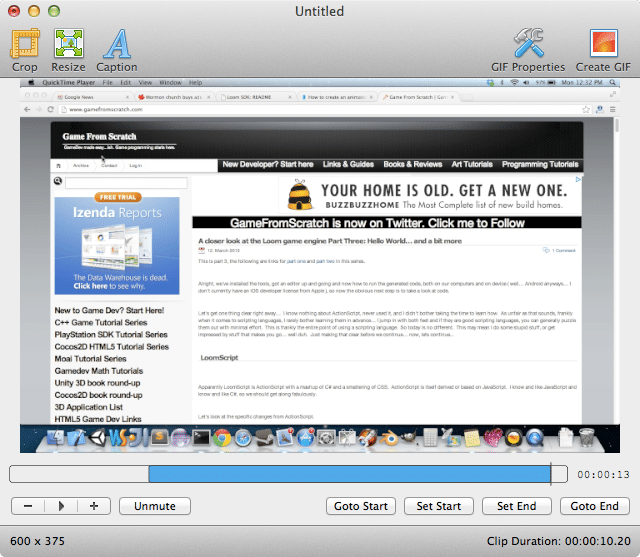 From this point on, its dirt simple… you can crop or scale your selection ( I scaled mine down ), set the start and end points, apply filters and finally export your gif.  When you create the gif you get a preview, with resulting file size, then you can play around a bit to get the file to a size you like.  The app itself was virtually instant, much much much faster than the gimp was working with individual frames.

Here is the above gif, weighing in about about half a MB.  In most of my captures I would use a much lower frame rate and bit rate, thus achieving an even smaller size.

That same GIF through other services would have weighed in at a several MB.

So, if you are on MacOS and looking to create an animated GIF ( yes… there are uses! ), this is certainly 5$ well spent.

If you are the author, first off, great job.  Second, I would recommend you add a window when the app first loads, as well as the ability to skip sections in the videos timeline.  Both are nitpicking though for a 5$ application.