Over on the PlayN Google group PlayN 1.2 has been announced.  I have checked and it is up on Maven, although you need to click “Include snapshot archetypes” to find it.  To get started you can follow this install guide using these settings: 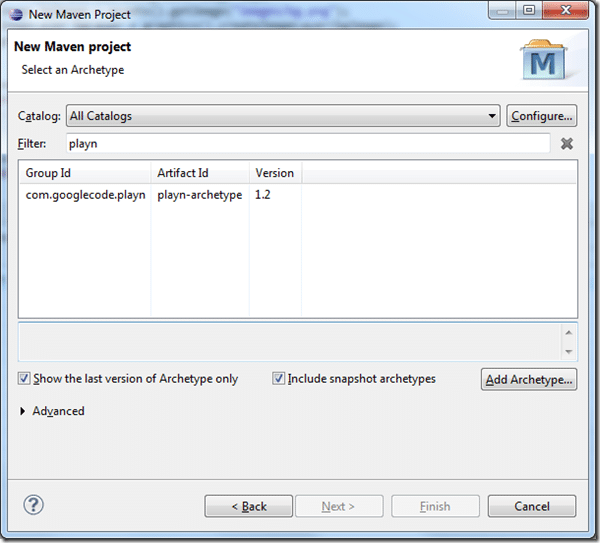 As to what’s actually new?

– You can now listen for mouse and pointer events directly on layers.
– Ray brought the Flash backend up to date. Christopher &co at
King.com shipped an awesome Facebook game using it.
– There’s an experimental GL20 interface that allows you to make
OpenGL calls directly. It works on Android and WebGL.
– Image.subImage relieves you from having to roll your own image tiling code.
– The iOS backend is almost entirely done. There’s an ios submodule in
the new Maven archetype. A getting started guide is still needed.
– Check the release notes for all the other awesome improvements, both
large and small.

In addition to playn-1.2, I have also released tripleplay-1.2 for your
user interface creating pleasures (along with a grab bag of other
useful things)

Flash and iOS maturing are both great news, and direct access to OpenGL are sure to be useful features.  More details of what’s new can be found in the release notes.